How Bad Could It Be?: Arnold, We Hardly Knew Ye 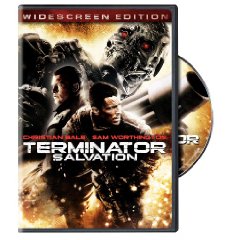 Just finished watching the new Warner Home Video DVD of Terminator Salvation, the latest entry in the long-running Scary Robots From the Future series that used to star the governor of California. I must admit, I deliberately missed this one when it played in the theaters. For one thing, I'd pretty much lost interest in any of the dangling questions left over from the last one (which at least had that never to be forgotten scene where Claire Danes traps Nick Stahl in a dog cage in the back of her veterinarian's office). For another, TS director McG is the kind of auteur who makes me really nostalgic for the subtlety and narrative coherence of Michael Bay.

Still, I'm a fan of star Christian Bale, I've been known to enjoy watching CGI stuff blow up in the comfort of my living room, and the recent Terminator TV spin-off series had a fair amount of juice, so I figured I'd give the disc a spin.

The plot (adapted from the DVD box copy):

In the aftermath of Judgement Day and the takeover by the machines, John Connor (Bale), the destined leader of the human resistance, must counter Skynet's devasting plan to wipe out mankind. As Connor rallies his underground street fighters for a last desperate batte, he realizes that to save the future he must rescue his own father, Kyle Reese (Anton Yelchin, filling Michael Biehn's shoes only adequately). But the most shocking discovery comes with the arrival of Marcus Wright (Sam Worthington), a mysterious loner from the past who challenges Connor with an impossible choice that will determine the future of the human race -- thus leading them both on a brutal journey into the very heart of the enemy AND setting up a sequel if the grosses warrant. Oh joy.

Here's a rather lengthy trailer to give you an idea of how the above actually plays out.

Anyway, cutting to the chase, the answer to our earlier question is "probably a little bit better than Metalstorm: The Destruction of Jared Syn," which is to say this is a not awful generic post-nuke apocalypse chase picture that doesn't feel like a Terminator film at all, lacking as it does anything in the way of terror, surrealistic machine poetry, or -- most fatally -- a cool and relentless villain. Ironically, the worst I can say about McG's direction here is that it's rather efficiently faceless; the kandy-kolored vulgarity of his Charlie's Angels flicks would actually be an improvement, although to give the hack his due, at least you can follow what's going on in the action scenes, interminable and seen-it-all-before as they are. As for the rest of it, let's just say the CGI robot monster stuff (especially the riderless motorcycles, doubtless a cool idea on paper) rarely convinces, Christian Bale spends most of the movie (almost literally) barking his lines, and that the time paradox stuff bothered me less than the the fact I lost two hours of my life watching the damn thing.

On the other hand, the great Jane Alexander is in it as a futuristic resistance fighter/matriarch, and I've always had kind of a thing for her. Also: Danny Elfman's score is surprisingly unironic and even moving, so on balance the film isn't a total loss.

In any case, you can order it here, although if ever a movie had "Wait for cable" written all over it...