How Bad Could It Be?: L'Ennui au Musée 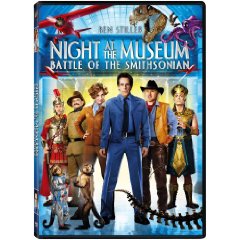 Just finished watching the new Fox Video DVD of Night at the Museum: Battle of the Smithsonian, the 2009 sequel to the similarly titled Ben Stiller kids comedy FX blockbuster from 2006. If truth be told, I missed this one in the theaters, although "I avoided this one" would probably be a more accurate wording. Basically, I thought the original was at best a fair half hour Twilight Zone episode -- sad sack museum guard Stiller discovers the exhibits come to life at night when nobody's watching -- padded out beyond reason, the whole nowhere near as funny or charming as it obviously thought it was. Still, it occured to me that maybe Stiller has to pay his dues in dumb vehicles like this so the studios will let him do stuff like Tropic Thunder. Plus the switch of locale from NYC to the Smithsonian seemed like it could conceivably generate a few laughs, and given that the divine Amy Adams had been added to the mix as Amelia Earhart, I figured at the very least it might be worth a look.

The plot (paraphrased from Wiki):

Two years after Larry Daley (Stiller) defeated the three night guards that plotted to steal The Tablet, he is now head of Daley Devices, a company that he founded to manufacture his inventions. These inventions, including the Glow-in-the-Dark Flashlight, the Unloseable Keyring, and the Oversized Dogbone, were created from his experiences as a former night guard. Upon revisiting, he finds...

Oh please, who cares. It's idiotic.

Anyway, cutting to the chase, the answer to our earlier question is "not absolutely horrific, but if you really like it you're so starved for entertainment that medical attention is probably necessary." Basically, the sequel, like its predecessor, is a decent sit-com premise inflated to feature film length, with all the tedium that entails. Director Shawn Levy -- who can be glimpsed on a bonus making-of documentary pretending he doesn't know how mediocre the whole thing is -- tries to compensate for the screenplay's lack of wit or coherence by trowelling on so many CGI effects it's almost oppressive, a tactic that, shall we say, doesn't quite work. In fairness, however, the aforementioned Adams, although miscast, is delightful as the plucky aviatrix, and Hank Azaria also provides a few laughs as a pharaoh with a speech impediment. Okay, not exactly Shavian stuff, but you're grateful when he's onscreen.

Here's the trailer to give you an idea.

In any case, if the above tickles your funny bone, you can order Night at the Musuem: Battle of the Smithsonian here. There's also a deluxe two-disc version with all sorts of extra filler, but if you want that, frankly, you're on your own.