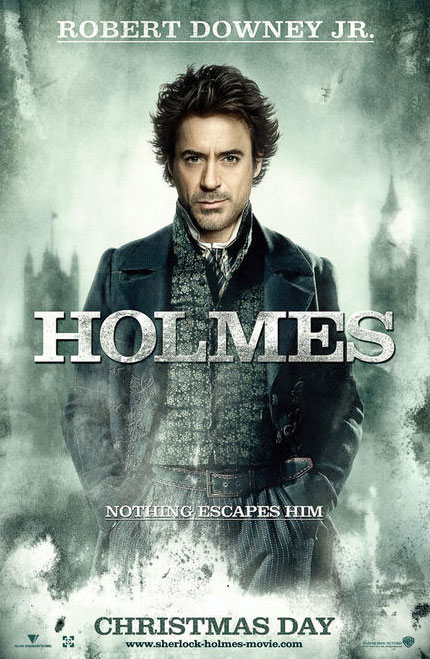 Caught the ex-Mr. Madonna's revisionist take on the Great Detective over the weekend, so please indulge me a few random observations that have sprung to mind more or less unbidden.

First of all, it's even worse than Avatar, which is in fact the worst movie ever made. Honestly, if you enjoyed that one, you're either an extremely undiscriminating fifteen-year-old or seriously starved for entertainment.

Okay, I'm kidding about Avatar, which I haven't seen yet, but I'm sure I'm right anyway.

In any case, I was talking about director Guy Ritchie's Sherlock Holmes, which (as I already mentioned) I actually have seen, and which is actually modestly diverting overall, thanks (mostly) to the chemistry between Robert Downey Jr. (as Holmes) and Jude Law (as Watson), or should I say what chemistry director Ritchie allows to intrude upon a serious of extremely loud, pointless and incoherent generic CGI action scenes that comprise the bulk of the film.

Now that I think of it, "loud, pointless and incoherent" pretty much sums up the esthetic of Ritchie's entire ouevre, although that omits "laddish" and "smug," two other words more or less unavaoidable when contemplating his new Holmes. Although the most perceptive comment anybody is likely to make about the film has already been made by A. O. Scott of the New York Times, who noted that its plot involves "a conspiracy so diabolical that it fails to be interesting."

To give SH its due, however, I would be remiss if I didn't point out that it has a reasonably compelling Victorian sci-fi look in a couple of sequences (if they ever make a film out of Bruce Sterling and William Gibson's steam-punk classic
The Difference Engine, I hope SH production designer Sarah Greenwood is on board), and that Ritchie regular Mark Strong makes a really cool villain, residing as he does on a continuum somewhere between real-life sinister Victorian occultist Aleister Crowley and Buster Keaton. The screenplay is also not without flashes of wit. For example, when Watson discovers Holmes -- after a run-in with Rachel McAdams's Irene Adler (the temptress who was for Holmes, as Watson says in one of Conan-Doyle's classic short stories, "always the woman") -- on the floor of their Baker Street lodgings apparently drunk, he tsk-tsks "You do know what you are drinking is meant for eye surgery?" Okay, not exactly Shavian, but as Law delivers it unarguably funny.

Incidentally, I have no problem with revisionist takes on Holmes per se, even one, like Ritchie's, that reworks the character into something of an action hero. Actually, that was already done to much better effect in the wonderful Holmes versus Jack the Ripper thriller A Study in Terror, from 1965, with John Neville as a Holmes conspicuously unafraid to get his knuckles scraped. My problem here is that Ritchie's sole innovation (if that is the word) in that regard is to restrict Holmes' legendary deductive processes to figuring out in advance exactly what combinations of karate chops will most quickly incapacitate an opponent. This is kind of amusing the first time you see it, but of course Ritchie being Ritchie, he repeats the sequence at great length later on just in case you missed the point of the joke (fat chance).

Ritchie being Ritchie, of course, is probably the ultimate point of Sherlock Holmes. Say what you will about the guy, but there's no use pretending that (like his more successful American contemporary Michael Bay) he isn't a genuine auteur, a filmmaker with an unmistakable personal vision -- albeit an embarrassingly adolescent one -- that he's managed to get onto the screen largely unfiltered. That being the case, if you enjoy this sort of thing then mazel tov to you, I guess, although if you're actively rooting for SH to be the first episode in a franchise (the film ends with canonical Holmes villain Professor Moriarity ready to do something nefarious in an obviously planned sequel) than I can only assume you have some kind of direct financial involvement in the project.

I should add that the aforementioned A Study in Terror, which aired over the weekend as part of TCM's festival of classic Holmes flicks, will be available from Sony some time next year and can be pre-ordered over here. I had forgotten that the young and extremely toothsome Judi Dench is in it, but in any case both it and her behoove beholding.

I should also add a recommendation for an even more interestingly revisionist Holmes flick. I refer, of course, to Murder By Decree, another (and even better) Holmes versus Jack the Ripper epic from 1979.

As you can see, it features Christopher Plummer as an almost movie star glamorous Holmes, and a scene-stealing James Mason as a a super-competent and very funny Watson. How a movie this good -- hint: it's unthinkable except as a post-Watergate parable of government corruption -- was directed by Porky's auteur Bob Clark is a mystery that may never be solved, but in any case MBD it makes Ritchie's take look even more puerile by comparison, and it's not to be missed; you can order a terrific new DVD version of it over here.