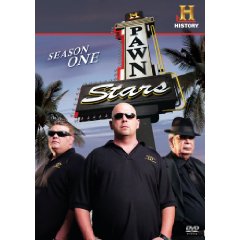 Those who know me at all well (a small and admittedly pitiable group) are aware that I am by no stretch of the imagination a fan of TV reality shows. That said, I've recently stumbled across one such that's not only hooked me, but has such obvious potential as a blockbuster motion picture that it's got me chomping at the bit to produce it.

I refer, of course, to the History Channel's Pawn Stars (currently airing on Sunday nights at 10pm EST -- check you local cable listings).

More specifically, PS is set in a high end family-owned Vegas pawn shop run by patriarch Richard Harrison, the sardonic old coot who founded the place and who functions as the show's Greek chorus. His son Rick Harrison is the brains of the operation; his grandson Corey Harrison, who's being groomed to take over the business, is the bumbling idiot whose Oedipal issues and incompetence provide the drama and most of the jokes (along with his even dumber childhood pal and sidekick Austin "Chumlee" Russel.)

Here's the poster for the movie that, as you can gather, I think is frankly dying to be made. 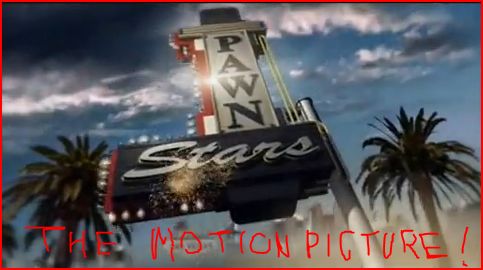 Okay, obviously there's more to the story than just drugstore cowboys doing art appraisals. In fact, what makes the show special for me is its unquestioned breakout star -- the irrepressible Danielle "Peaches" Pearey.

AKA the blonde -- sorry, there's no other word -- bimbo who's perpetually late for work and being banished to the graveyard shift with Chumlee. 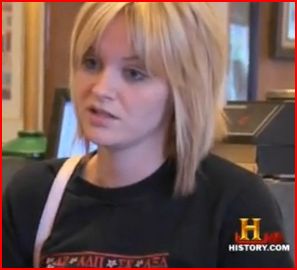 Here's her first great performance -- the Harrisons telling her to shape up from the first season's episode 9. Peaches makes her entrance at approximately 6:41.

As you can see, the dialogue is priceless.

RICK: Peaches...remind me again why I don't fire you? 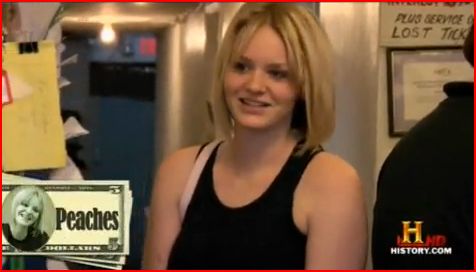 Okay, this is an obvious world-wide smasheroo. I'm thinking Wilford Brimley for the old man (the late Richard Farnsworth would have been better, but you can't have everything), Bruce Willis for Rick, Jack Black for Corey, and Jonah Hill as Chumlee.

Peaches as herself, of course.

You can pre-order the complete first season on DVD here; the set drops, as the kids say, on January 10.

More importantly, if anybody at a studio is reading this and has even a scintilla of guts and vision, please contact my rep Morty Lachman at the Gonif Agency and we'll talk.