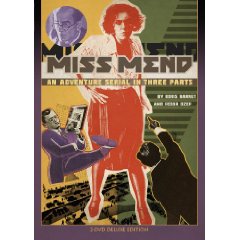 Video Event of the Week: Could Warner Home Video's Blu-ray and DVD versions of Harry Potter and the Half-Blood Prince, the sixth (but hardly the last) installment in the kid wizard series, possibly make the cut? Could Sony's discs of Julie and Julia, the all-star acting contest in which Amy Adams is soundly trounced by Meryl Streep, conceivably get the nod? Or might Universal's special Blu-ray edition of Michael Mann's Public Enemies, with Johnny Depp as the dapperest John Dillinger you'll ever see, by any chance be The One?

All worthy, to be sure, and in fact I'll probably be writing about all three quite soon, but for my money it's got to be Flicker Alley's astonishing new two disc set of Miss Mend, the blockbuster silent Soviet adventure serial from 1926.

It's kind of hard to give you a feel for what Miss Mend is like without a clip, which is to say in a lot of ways it's sui generis in its mash-up of various odd elements. At heart, it's a simple pulp entertainment, but as directed by Fedor Ozep and Boris Barnet, it's also far more ambitious. In equal parts a sneakier critique of Capitalism than you'd expect from a Soviet-made film (it's set in a sumptuously mounted America that only existed in the filmmakers imagination) and an unabashed Hollywood emulation, it takes its basic set-up -- the plucky titular working girl menaced by sinister forces -- from traditional serials in the Perils of Pauline sense and then tricks it out with avant-garde art direction out of Soviet Constructivism, slapstick comedy a la Charlie Chaplin and Buster Keaton, and even nods to German Expressionism, Fritz Lang and the Dr. Mabuse films. It's also very densely plotted, but even with a four hour plus running time it's one of the fastest moving silents I've ever seen, both in the non-stop action sense and the cutting; it seems to have been edited against a ticking stopwatch by somebody high on fairly potent stimulants. At times, as a result, it takes on an almost surreal quality, and the frequent special effects -- the in-camera tricks, like the dissolving photos in the picture frames -- often look startlingly modern and up-to-date.

Here's a couple of images to give you at least some idea. Here's the aptly titled Big Chair... 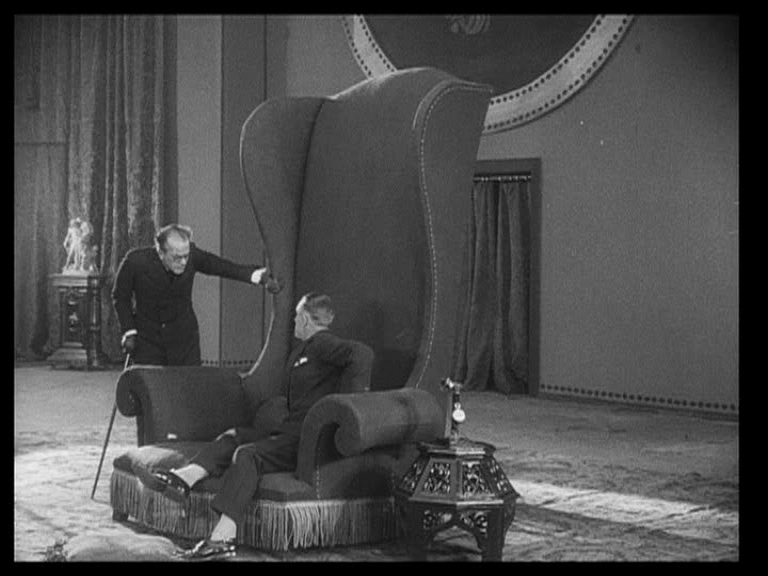 ...and here are a couple of the bad guys in the Death Lab. Insert sinister laugh here. 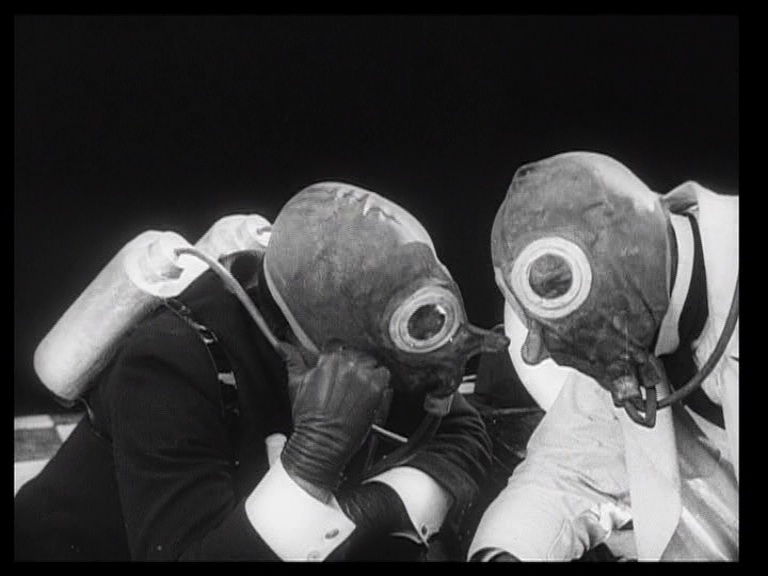 As you can see from the above, Flicker Alley's high-def transfer, from a largely pristine print, looks astoundingly good given the film's age, and obviously the DVD is highly recommended. If I have any quible with the package at all, however, it's with Robert Israel's new chamber ensemble score, which -- like most of the silent film accompaniments by Israel I've heard -- sounds pretty much like the sort of high society background music you might have encountered at a ritzy New York restaurant circa 1925. I'll grant you it's authentic enough, and it certainly doesn't interfere with your enjoyment of the film, but as somebody who remembers the gorgeous full orchestra symphonic scores Carl Davis was writing for silent classics in the 80s and early 90s -- if you haven't seen Keaton's The General with the Davis accompaniment you're missing one of life's genuine pleasures -- I have to say that Israel's work seems like fairly weak beer. That said, there's a nice documentary on the recording of the new score on MM's second disc, and I'm feeling a bit more sympathetic to Israel as a result.

In any case, you can -- and emphatically should, ASAP -- pre-order Miss Mend from Flicker Alley right here.

Okay, that said, and because things will doubtless be pretty quiet around here for the next few days, here's a fun and obviously relevant little project for us all:

For my money, Stirling was the greatest kick-ass babe in serial history, although Kay Aldridge in Perils of Nyoka certainly gave her a run for her money.

One of the most most bloated and stupid movies of its decade, although to give it its due it pretty much put an end to the fiction that Harlin was a director to be taken seriously. Davis looks uncomfortable throughout, although its hard to tell whether that's because of her pirate costume or the fact that she was married to the big Finnish dope at the time.

Said it before but I'll say it again: All women -- past, present, and future -- pale before the magnificence that is Xena, Warrior Princess. Have I mentioned that she fought in the Trojan War, boinked Julius Ceasar, AND met Jesus? Plus -- she ululates!!!!

Poor Halle -- she looked great in the cat suit, but nobody bothered to give her a script. Seriously, this is a seriously awful film. Then again, I expected nothing less from a director with an even stupider nom de cinema than Terminator Salvation auteur McG.

And the numero uno action babe of them all, it's so blindingly obvious you wouldn't have the nerve to disagree with me, obviously is --

A made-for-TV female Zorro knockoff, and one of several crappy syndicated adventure shows that sprang up in the wake of Xena. Ah well, Santiago sure was cute as the Masked Avenger in Black Leather, I'll tell you that for free. Although the fact that her skimpy little mask somehow kept people from figuring out her true identity was only one of the series many, shall we say, improbabilities.