Wish I'd Said That (An Occasional Series) 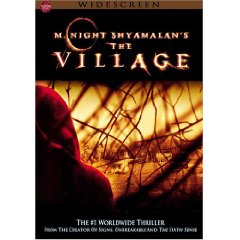 Okay, to recap: So we were speaking over the weekend [scroll down and see the comments here] of the increasingly wiggy M. Night Shyamalan, autuer of the increasingly looking-like-a-fluke supernatural masterpiece The Sixth Sense in 1999 and what seems like scads of utterly nonsensical followups since.

And then yesterday I was paying long over-due tribute to the late great New York Times film critic Howard Thompson, the inventor of the killer one-line film review/blurb as a genre unto itself.

Now, I'll warrant you I'd be hard pressed to pick which of Shyamalan's films since TSS is the silliest. That mishegass with Samuel L. Jackson about the comic book guy who thinks Bruce Willis is immortal? The whatever it was with Paul Giamatti as a Philadelphia maintenance man who discovers a wood nymph at the bottom of his apartment's swimming pool? Or maybe the killer trees thing with Betty Buckley as the most over the top crazy old coot since Elspeth Dudgeon in The Old Dark House?

All nuts, obviously, but Shyamalan's nadir to date is probably the 2004 The Village, which has something to do with a sort of Amish community menaced by what might be monsters in the surrounding woods. Or by urban renewal. Or by I don't know what.

Here's the trailer to give you if not quite an idea, then at least an inkling.

I bring all this up not just because of The Village's intrinsic awfulness, but because as I was researching the Thompson tribute, I remembered that TV had occasioned probably my favorite pithy film crit putdown of recent years. Even if it is from Roger Ebert.

That being the case,I thought I'd share it. Here's Ebert's money quote, in this case about the trademark Shyamalan surprise ending that caps The Village like a pointy paper hat on a dunce's head.

"To call it an anticlimax would be an insult not only to climaxes but to prefixes."

Oh, what I wouldn't have given to have thought of that one first.

In any case, if you must you can order a DVD of The Village here, although if we subsequently meet I will be perhaps understandably reluctant to shake your hand.