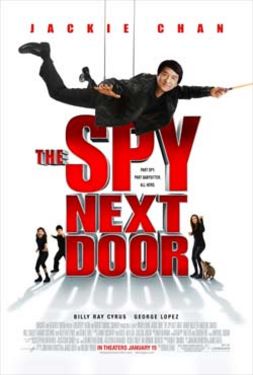 [Alarming news from Lionsgate Films: The new Jackie Chan flick, "The Spy Next Door," will be arriving in theaters everywhere on Jan. 15. Why alarming? Allow me to answer that question by updating parts of a cautionary tale from the very first column I wrote here, back on May 1, 2008.]

Sometime in the dim, dark past -- actually, the fall of 1993 -- I found myself in a comedy club watching a performance by one of my heroes, the late great Bill Hicks (for my money, the last American comic who might be said to have been inhabited by genius, but that's a subject for another blogpost).

It was a strange moment in pop culture history -- the season, you may recall, when just about every sentient mammal in America had or was about to get their own talk show. Apparently, without anybody noticing, some kind of law had been passed somewhere authorizing (hell, requiring) every Z-list celebrity annoyance to host an hour-long syndicated gabfest. I'm not kidding about this; at that very moment, some producer had just marketed a show for Danny Bonaduce, the kid from The Partridge Family whose main claim to fame was that he'd beat up on a hooker after discovering she was a transvestite.

In any case, Hicks (who was dying of cancer at the time, although nobody in the audience, myself included, had any idea) came out on stage that evening apparently somewhat bemused by the phenomenon. "I'd just like to announce that I'm getting my own talk show," he said. "It's going to be called Let's Hunt Down and Kill Billy Ray Cyrus." This got a pretty big laugh at the time, since Cyrus was at the peak of his post-"Achy Breaky Heart" celeb infamy and had not yet unleashed his hell-spawn daughter on an unsuspecting world. In any case, the joke has stayed with me, and the other day I had an odd flash: Is there anybody currently working in the movies who might deserve to be hunted down and killed -- strictly metaphorically, of course -- on network television?

Submitted for your approval: Gregory Poirier.

Okay, I know what you're thinking -- this guy had nothing to do with Transformers or the Michael Douglas remake of The In-Laws or even Avatar (The Worst Movie Ever Made©). True enough, and for that, the thanks of a grateful nation. Nevertheless, the guy did write (and direct) the most reprehensible film of the 21st century to date, the 2001 Jerry O'Connell vehicle Tomcats.

In case you haven't seen it, this is a purported comedy in which a surgeon first removes a major character's cancerous testicle and then (after wacky complications ensue) winds up eating it over coffee. There are other, shall we say, problems with the film -- frankly, I may never recover from the sight of a Speedo-clad Jake Busey spanking himself -- but let me say this again, both in sorrow and in anger: Writer/director Poirier was willing to give a character testicular cancer -- testicular cancer! -- for no other reason than to set up a dumb sight gag. I understand, of course, that we all currently inhabit a post-Farrelly Brothers world, but really. Some things are just unforgiveable, and this is one of them.

That said, and bringing things around to our central theme, I am -- to paraphrase something I said up top -- alarmed to note that Poirier is credited as one of the principal writers on (you guessed it) Jackie Chan's The Spy Next Door. Which, as I also mentioned up top, arrives in theaters everywhere next week.

Assuming the trailer is representative, I think we can say that, at the very least, there is some highly unoriginal s**t happening with this one. And note that none other than Billy Ray Cyrus is on hand as well. Clearly, there's some kind of Bizarro World circle of life thing going on here.

Whether any of this justifies what Hicks suggested -- that we try to hunt down Poirier or Cyrus and stop them before they pull this kind of crap again -- I will not venture.