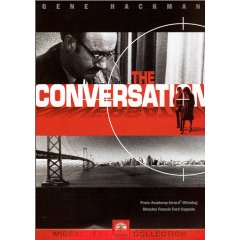 The past, L.P. Hartley wrote, is a foreign country -- they do things differently there. I was reminded of that truth over the weekend, when I revisited -- for no particular reason -- a film I haven't seen since its theatrical run in 1974, but which at the time I thought was a masterpiece.

I'm referring, in case you were wondering, to writer/director Francis Ford Coppola's first post-Godfather effort The Conversation. And this morning, I'm not so sure about the whole masterpiece thing.

If you've never seen it, The Conversation is, on the most prosaic level, a post-Watergate paranoid conspiracy thriller. Gene Hackman stars as Harry Caul, a high-tech surveillance expert who's been hired to secretly record a seemingly innocent young couple (Frederic Forrest and the pre-Laverne and Shirley Cindy Williams) who appear to be in some kind of danger. Eventually Caul -- who, while working for the NYC District Attorney in the 60s, was inadvertently responsible for the deaths of two mob informants -- begins to suspect that he's being used in a way that will repeat the tragedy and tries to thwart the shadowy figures who've hired him. There's a great surprise twist at the end, and along the way there are a bunch of sketchy and fairly depressing revelations about Caul, who is a classic burnt-out case in the Graham Greene sense, a man whose soul has been eaten away by the moral implications of the job he does. A frighteningly young Harrison Ford (excellent) is in there as well, as is Teri Garr in an inexplicable Little Orphan Annie wig, an uncredited Robert Duvall and -- in the crucial opening surveillance scene in a San Francisco park (repeated from various angles throught the film) -- irksome real-life mime Robert Shields, who soon after would co-star with wife Lorene Yarnell in one of the most bizarre TV variety shows of the 70s.

Here's the original trailer to give you an idea.

Like I said, on the most prosaic level, it's a paranoid conspiracy thriller, and the spiritual cousin of lots of other post-Watergate film's from the 70s, most notably Alan J. Pakula's The Parallax View. On that level, I'll stipulate it mostly still works -- you don't see the aforementioned plot twist (which turns, quite cleverly, on the inflection of a single word) coming, and there's a wonderful air of creepy menace throughout. That said, however, it's also far more self-consciously arty than I remembered, to the point where (for my money, anyway) it now seems like the work of a talented college filmmaker doing a fairly shameless rip-off of Antonioni's Blowup, which is obviously problematic on the pretension level. It's also glacially slow -- although I'll admit my attention span may have been shot to hell by exposure to crappy big budget Michael Bay movies over the years -- and (perhaps most egregious) composer David Shire's vaguely modernist solo piano score is just painfully awful. No kidding, there were a couple of scenes where the music was so irritating I wanted to find the off-camera keyboardist and throttle him on the spot.

Obviously, though, Coppola had more on his mind here than post-Nixonian angst (the original script was written years before Watergate, as it happens) and in that regard, The Conversation's concluding image, striking and even iconic as it is, sums up my problems with the film. As you can see, Hackman's character, having discovered that the bad guys have somehow bugged his apartment, rips the place apart in an ultimately futile attempt at finding the hidden microphones, and finally sinks to the floor, reduced to wailing on the saxophone he plays (rather badly, if truth be told) as his last source of connection with...anything. 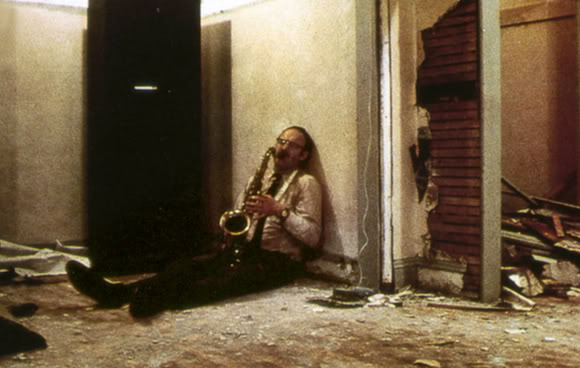 Let's just say that the question of whether this is reality rather than metaphor -- i.e., did he actually destroy the place? -- doesn't seem as interesting as it did to me in 1974. And neither does the way we're supposed to feel about Caul (including his sort of troweled-on Catholic guilt). In fact, The Conversation now strikes me as dealing in rather laughably trite undergrad existential tropes across the board. O alienation, O loneliness! -- it's like the lyrics to "The Sound of Silence" made flesh, for heaven's sake.

As I said, though, maybe it's just me, and obviously Hackman is always worth watching. In any case, if you're at all curious, you can order the deluxe DVD edition -- with some fascinating 70s behind the scenes documentary footage featuring Coppola and sound designer Walter Murch -- over here. You can also do what I did and just rent it from Netflix, of course.