Great Lost Films of the Nineties (An Occasional Series) 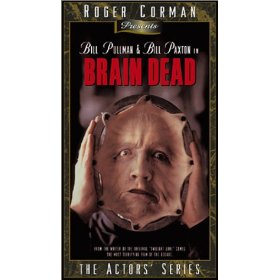 That epigram, from the Taoist master Chuang Tzu, opens Brain Dead, an inexplicably little known 1990 sci-fi/horror/fantasy starring the two great Bills -- Pullman and Paxton -- in their only co-starring roles to date. Surreal, funny, and even, yes, a tad profound, it's not just one of the coolest "What is Reality?" films of all time, it also covers the same stylistic and thematic ground as a couple of later, better known flicks, but with a hell of a lot less pretension (I'm talking to you Lost Highway; stick it in your ear Vanilla Sky).

Valkyrie -- Surprisingly effective WWII period costume piece/historical thriller with Tom Cruise cast against type as a high-ranking Nazi who isn't also gay. Think Keyser Söze without the limp and a cameo by Hitler.

Yes Man -- The first Jim Carrey comedy that could conceivably be mistaken for after-dinner conversation at the Algonquin Round Table. Seriously -- an unexpectedly droll, character driven farce, and Zooey Deschannel (her doe eyes, her orchestra and her chorus) is a total hoot.

But I digress. In any case, Brain Dead (not to be confused with the 1992 zombie comedy of the same name by Lord of the Rings auteur Peter Jackson) is based on an unproduced screenplay written in 1967 by the great Charles Beaumont. If Beaumont's name doesn't ring a bell, he was -- along with Richard Matheson -- a prolific and wildly imaginative pulp scribe whose work Rod Serling adapted on numerous occasions on the original Twilight Zone. Beaumont was also a frequent collaborator with B-movie titan Roger Corman, who apparently owned the rights to the script; years later, writer/director Adam Simon, toiling in the Corman factory, dusted it off and updated it into a hall of mirrors black comedy.

Top neurosurgeon Dr. Rex Martin (Pullman, never funnier) is studying brain malfunctions that cause mental illnesses. High school friend Jim Reston (Paxton, ditto), a successful businessman at the sinister Eunice Corporation, enlists Martin's aid in reading the mind of John Halsey (Bud Cort), a genius mathematician who once worked for the company but is now a hopeless psychotic at a nearby asylum. Paxton gets Pullman to perform surgery in order to unlock the corporate secrets buried in Cort's consciousness, but as he begins operating he starts to experience the latter's paranoid dreams. Pullman's ordeal takes one hairpin turn after another as he becomes lost in a maze of alternate realities, and after a series of hilarious and creepy are-they-or-are-they-not hallucinations (my fave: he wrestles over a brain specimen in a jar with a homeless man) the whole thing resolves in a metaphysical switcheroo that will leave you breathless.

There's more, including the toothsome Patricia Charbonneau as Pullman's possibly unfaithful girlfriend and the ubiquitous George Kennedy as a Eunice exec; here's the trailer to give you an idea of the off-kilter Twilight Zone-ish vibe of the thing. 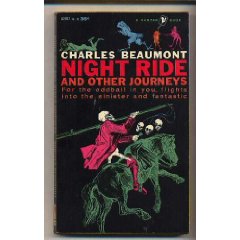 Why this isn't acknowledged as a contemporary classic is, frankly, beyond me, but it may stem from having been ill served on home video. The VHS version I saw in the early 90s was washed out and faded, and the subsequent 2000 DVD from Corman's New Concorde video imprint (which was at least in widescreen) was nonetheless either transferred badly or derived from the softest print imaginable; the result was that a handsomely made (albeit low budget) thriller now looked like a complete El Cheapo piece of crap. There was a 2005 DVD reissue from Buena Vista which you can snag here; I haven't seen it, but I'm assuming the film was visually refurbished for the update. I certainly hope so.

In the meantime, if any of this has got you interested in Beaumont (who died tragically young at 38) you can find the classic anthology Night Ride and Other Journeys (1960), which includes some of his best short stories (many of them, including the incomparable "The Howling Man," familiar from classic Twilight Zone episodes) over here.

I'd also be remiss if I didn't mention that Beaumont wrote Roger Corman's The Intruder, a 1962 William Shatner vehicle that may in fact be The Greatest Film Most People Have Never Seen, but we'll get into that one on the morrow.