How Bad Could It Be?: Pants on Fire 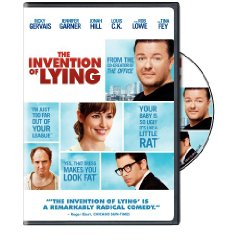 Just finished watching the new Warner Home Video DVD of The Invention of Lying, the 2009 comedy starring original Office creator Ricky Gervais (who also co-wrote and directed). I missed this one in theaters (for no reason in particular now that I think of it) but of course in that regard so did pretty much everybody else (Gervais was actually very funny on this subject at the Golden Globes the other week). Still, I've enjoyed his work a lot in the past (I belong to that small sub-species of humanity who thought that Ghost Town, his 2008 debut as a leading man, was an absolute riot) and I figured with a supporting cast including Jennifer Garner, Rob Lowe and Tina Fey, I should definitely give it a look.

The plot (adapted from a certain on-line encyclopedia):

The place: Earth, in an alternate reality where no one has ever lied, all movies are documentaries, and all TV commercials straightforward listings of fact. (No religion, too, as John Lennon famously put it). The hero: Mark Bellison (Gervais), a fat loser, or so everybody tells him, so it's obviously true. Ellison goes out on a date with Anna McDoogles (Garner) who bluntly admits she's not attracted to him because he's, you guessed it, a fat loser. The next day Mark is canned from his job and evicted by his landlord. Depressed, he decides to withdraw his meager savings from his bank branch, but the computers are down, and when a teller asks him how much money he has in his account, Bellison has an epiphany and lies, claiming to have twice as much as he really has. The teller, assuming that it's the truth, gives him the money. After this light-bulb-over-the-head-moment, Bellison realizes the potential of prevaricating, and immediately tests it out by telling a woman that the world will end unless she has sex with him. Further wacky coplications ensue, as Ellison rightly figures that he can do almost anything he wants with impunity. But will the world be Ellison's oyster from now on? Will he rediscover some form of moral constraints? I actually know, but I'll be damned if I'm going to tell you, and in any case, I'd probably be lying anyway.

Here's the trailer to give you an idea of how some of the above actually plays out.

Anyway, cutting to the chase, the answer to our earlier question is "This is a genuinely funny piece of work and I have no idea why it didn't do better commerically." Certainly, it runs the risk of being a one-joke affair, but Gervais' wrings endlessly inventive variations on the High Concept premise, and his character is, rather surprisingly, a sympathetic Everyman, somebody you find yourself caring about both before and after the big comic reversal. The aforementioned supporting cast, particularly Garner (who underplays quite deftly) is also a hoot throughout (Philip Seymour Hoffman shows up as the world's dimmest bartender) and there are more good throwaway gags here than you can keep track of; my personal favorite is the depressingly honest sign in front of the nursing home where Gervais' mother is stashed -- "A Sad Place For Hopeless Old People."

Extras with the package include the usual deleted scenes and outtakes, a very droll deliberately sycophantic documentary tribute to Gervais' genuis, and a couple of other slightly skewed sort-of making-of docs, including a prequel narrated in characteristically plummy tones by the recently knighted Sir Patrick Stewart. I swear to you I'm telling the truth when I say you'll probably fast forward through all of them.

Bottom line: The film itself is the attraction here, and it's a comic sleeper (verging on profundity) if there ever was one. You can -- and very definitely should, IMHO -- order The Invention of Lying here