How Bad Could It Be?: Post-Christmas Rodent Monday Wrap-Up 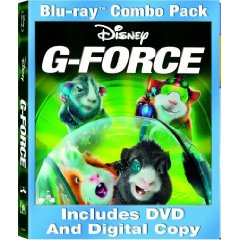 Apolgoies for not getting to this during the holidays, but I finally had a chance to watch the new Disney DVD and Blu-ray combo of G-Force, the CGI-animals-and-live-action flick that's essentially Mission Impossible With Gerbils. I missed it in the theaters for whatever reason, but since the voice casting sounded promising -- Sam Rockwell can pretty much do no wrong in my book -- and since as a rule I have no problem with talking animals as a film's raison d'etre (see: Babe) I figured I'd give it a spin.

Good guy mad scientist Ben (Zach Galifinakis, over-acting) has genetically engineered a team of rodents with human intelligence and given them high-tech gizmos enabling them to talk. His plan: Get the FBI to add his super furry animals to the nation's intelligence teams. The critters include guinea pigs Darwin (Rockwell), Juarez (Penelope Cruz, not as cute as in real life) and Blaster (Tracy Morgan, mugging audibly), as well as visually impaired mole Speckles (Nicolas Cage, typecast). Hoping to impress the FBI brass on the eve of a budgetary review, Ben sends the G-Force on an unauthorized commando-style raid on the compound of home electronics magnate Leonard Saber (Bill Nighy, amusingly megalomaniacal) who, as it turns out, is secretly plotting to destroy the world. Wacky complications ensue, and the FBI orders the unit shut down and the animals used as genuine guinea pigs in high-risk medical experiments. The team escapes, however, to a pet shop where they encounter a trio of moronic mice and a hamster (Steve Buscemi, frothing) that everybody insists is a ferret. Will the genius critters escape and foil Saber's dastardly plan? Frankly, there's about as much chance of my giving that away as there is of my making another gratuitous joke about Avatar being The Worst Movie Ever Made©.

Here's the trailer to give you a little taste of the film's blend of derring-do and anthropomorphism.

Anyway, cutting to the chase, the answer to our earlier question "it's an amusing kids action flick for about the first twenty minutes; after that, it will probably wear thin for anybody not an undiscriminating child below Bar Mitzvah age." The CGI animals are pretty convincing -- although the scene where Darwin encounters a live-action squirrel ("A civilian!" he exclaims) does, perhaps unintentionally, reveal the limits of the current technology -- and it's fun, initially, to see them doing all sorts of James Bondian things. But the humans (especially Will Arnett as the stick-up-his-ass FBI honcho) are the broadest of caricatures -- the movie pretty much lost me with the two obnoxious kids in the pet store -- and eventually the cutesie-poo factor of the thing becomes wearisome. On the other hand, Loudon Wainwright III does turn in up in an amusing cameo as an old coot, so it's not a total loss.

The movie was 3D in theaters, but neither DVD or Blu-ray is, alas, although the film doesn't seem to play any less enjoyably without the glasses. In any case, both disc versions have been given terrific transfers (the Blu-ray looks marginally better) and if you have a decent surround system, the film's soundtrack explosions will make an impressive demo for your home theater. Unprepossessing extras -- variously on the DVD and Blu-ray -- include the standard deleted scenes, bloopers and commentary tracks; I would estimate the chances of your accessing any of them more than once as somewhat less likely than the Dodgers returning to Brooklyn or the Pope announcing that sex is lots of fun.

Bottom line: You can -- and I wouldn't necessarily be upset with you if you did -- order G-Force here.