I Was a Teenage Avatar: My Last Word On the Subject (Seriously. I Promise.) 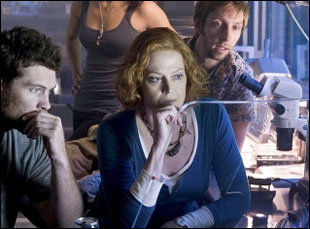 Oh yeah, Avatar. There was an interesting and perhaps unintentionally amusing front-page (!) thumbsucker about it in yesterday's New York Times, pondering, in typical Times-ian fashion, What It All Means.

Over the last month, it [Avatar] has been criticized by social and political conservatives who bristle at its depictions of religion and the use of military force; feminists who feel that the male avatar bodies are stronger and more muscular than their female counterparts; antismoking advocates who object to a character who lights up cigarettes; not to mention fans of Soviet-era Russian science fiction; the Chinese; and the Vatican.

Yada yada blah blah blah. We know -- it's like Woody Allen's line about the French critics in Zelig. Who considered the titular human chameleon "a metaphor for everything."

That said, I actually have a theory about Sigourney Weaver's character being a chainsmoker, which is probably the thing that annoyed me the most about Avatar. (Yeah, I know -- there's a lot more important stuff to be annoyed about. So sue me.)

So: What was Cameron thinking when he introduced such an obvious and jarring relic of an earlier time into a futuristic sci-fi film?

Again, from the Times:

Mr. Cameron said he had never intended Ms. Weaver's character, Grace Augustine, to be "an aspirational role model" for teenagers. "She's rude, she swears, she drinks, she smokes," wrote Mr. Cameron. "Also, from a character perspective, we were showing that Grace doesn't care about her human body, only her avatar body, which again is a negative comment about people in our real world living too much in their avatars, meaning online and in video games

Sorry, dude, but I call bovine fecal matter here. And I'm not an anti-smoking fanatic, either in real life (I quit ten years ago, but I have no problem with those who haven't) or in the movies (Cameron's actually right about Weaver's character not being a role model. And why should she be?).

Seriously, then: So why do I think Cameron did it?

For the same reason, I'm afraid, that George Lucas introduced those obviously offensive and seemingly inexplicable racial stereotypes into The Phantom Menace (you know which ones I'm talking about).

Because said racial stereotypes, or in the case of Avatar an idiotic anachronism like smoking in the 23rd century, are simply cinematic tropes from the old flicks that Cameron and Lucas grew up on but, sadly, never grew out of.

Doesn't matter if said tropes make no sense in a contemporary context -- it's simply the way those two auteurs think things are supposed to be done in the movies. Comic relief? Alien Stepin Fetchit. Tough guy? Cigarette in mouth.

Which is to say, further evidence of the paucity and essentially juvenile nature of their imaginations. And one of several reasons that Avatar, for all the money it will make, ain't Lawrence of Arabia, and James Cameron ain't David Lean.