If It's Monday, It Must Be Shameless Filler: Danish Pastry Edition 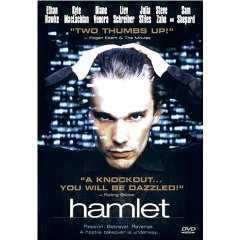 Just a quick postscript to Friday's entry on the new DVD of 10 Things I Hate About You, the 1999 teen comedy loosely adapted from Shakespeare's Taming of the Shrew starring the late Heath Ledger and the why-isn't-she-a-household-word? Julia Stiles. I'm embarassed to admit that I completely forgot about (and failed to mention) a far more interesting unconventional Shakespeare adaptation that Stiles made the following year.

I refer, of course, to Ethan Hawke's grunge Hamlet from 2000, about which some brilliant critic (whose initials are S.S.) had this to say at the time...

I actually really love this one, which has all sorts of felicitous little touches around the edges. The ghost of Hamlet's father, for example (a scary Sam Shepherd) disappears into a soda machine rather than a parapet, and Hawke as Hamlet leaves the "Get thee to a nunnery" speech on Ophelia's answering machine. Stiles, meanwhile, brings her trademark piercing intelligence to the role of the aforementioned doomed ingenue, and in fact she is now my second favorite Ophelia ever (the first remains Marianne Faithfull in the Tony Richardson/Nicol Williamson version, but that's a subject for another post). 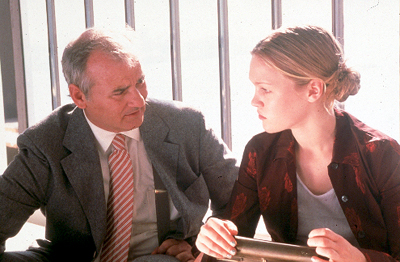 In any case, you can -- and very definitely should -- order Hawke's Hamlet here.