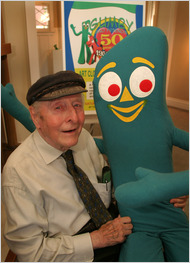 So I was reading the New York Times obituary on Art Clokey yesterday (Clokey being the animator who gave us Gumby, the emerald-hued iconic clay whatsit who's entertained several generations of kids and provided Eddie Murphy with one his better bits) when a little throwaway factoid totally took me aback.

Which means that Clokey, who also created the almost militantly square kids cartoon show Davey and Goliath, actually apprenticed with one of the more interesting (if today alas little known) figures in 20th century avant-garde cinema.

Vorkapich (1895-1976) was one of the guys who essentially invented the theory of film montage, and unlike a lot of esthetic theoreticians he was able to put his theories into rather stunning practice, both in artsy indies (to use an an anachronistic term) like The Life and Death of 9413: A Hollywood Extra with Robert Florey, and in big commercial Hollywood studio epics including Mr. Smith Goes to Washington. He created, shot, and edited scores of montages for features at MGM, RKO, and Paramount in the 30s and 40s, and for a while he was so ubiquitous that the word "Vorkapich" was frequently referenced in Hollywood screenplays. In a 40's entry in The Groucho Letters: Letters From and To Groucho Marx (Simon and Schuster, 1978), the great comedian talks about a particular film in which the director lets his camera "Vorkapich around," thus prompting (I believe) critic Andrew Sarris to note that Vorkapich was the only figure in movie history whose name had been converted to a verb by a member of The Marx Brothers.

I mentioned what was more or less the last project Vorkapich was involved in -- the 1961 psychedelic exploitation horror The Mask -- a few weeks ago. Vorkapich contributed a genuinely mind-blowing surrealistic voyage through Hell to the film, in 3D no less, but it's never been on DVD and its earlier VHS incarnations are out of print. Somebody has thoughtfully posted a part of that 3D sequence on YouTube, however, and if you have a DVD of some recent 3D movie (Journey to the Center of the Earth, for example) and the red-and-blue glasses that come with it handy, you can get get a little idea of Vorkapich's remarkable visual style.

And speaking of Art Clokey and the avant-garde, here's one of the great man's uncharacteristically hep creations -- the animated title sequence to the 1965 Vincent Price beach party epic Dr. Goldfoot and the Bikini Machine. To music by The Supremes, not less.

The mind, as they say, wobbles.