Weekend Cinema Listomania (Special Does the Name "Dick Armey" Send the Wrong Message to Both Gays and the Military? Edition) 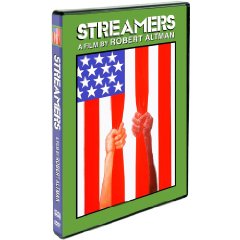 Video Event of the Week: Are we perhaps talking about the Criterion Collection's beautifully restored edition of Roberto Rossellini's War Trilogy, a three DVD set including Rome Open City, Paisan and Germany Year Zero? Could Sony's Blu-ray of the posthumous concert flick Michael Jackson's This is It by any chance make the cut? Or, on a slightly less morbid note, could Fox's Whip It, the Ellen Page coming of age flick that marks the directorial debut of Drew Barrymore, conceivably be The One?

All worthy, although you might have to put a gun to my head to make me sit through the Michael Jackson, but for my money it's got to be Shout Factory's first-time-on-DVD edition of Streamers, director Robert Altman's 1983 film adaptation of the Tony Award-winning play by David Rabe, strarring Matthew Modine and (in his screen debut) David Alan Grier

I go hot and cold on Altman, if truth be told, and Streamers, which I hadn't seen before, strikes me as one of his middling efforts -- not as ambitious and provocative as a MASH or Nashville (which I actually think is overrated, but that's a subject for another day) or The Player, but not an embarassment like the best forgotten A Perfect Couple or a disaster like Quintet either. Rabe's play itself -- which is about a group of young GIs (including a rich white gay kid coming to terms with his sexuality) waiting to get shipped off to Vietnam -- is rather more conventional and schematic than it probably seemed back in the day, but it works, and of course, its ensemble interractions are very much up the director's alley. Altman (and Rabe, who wrote the screen adaptation) don't do much to open the thing up cinematically, but while Altman's camera moves (blessedly) don't call attention to themselves, the feel of the thing is nonetheless a lot less stagey than you'd expect from what is essentially a one set movie shot in a fairly confined space. In any case, Streamers is an actor's showcase, and Altman gets wonderful work from everybody. Grier, in particular, is a revelation; I'd forgotten that he was capable of more than just failed sitcom snark.
.
Here's Shout Factory's DVD teaser trailer to give you a little taste.

The letterboxed transfer here seems a little soft and (for want of a better word) billious, but that's the way a lot of early 80s indies actually looked, of course. Bonuses with the set include a bunch of surprisingly interesting interviews with veterans of both the film (Modine, still boyish looking after all these years) and the original stage version (Herbert Jefferson Jr., who to my surprise actually had a career that didn't involve the original Battlestar Galactica).

In any case, Altman is Altman and even his minor works mostly behoove beholding. Which is to say that you can -- and on balance should -- order Streamers here.

Best or Worst Screen Adaptation of a Stage Play, Dramatic or Musical!!!

A decently written murder mystery melodrama (inspired, if that's the word, by real life thrill killers Leopold and Loeb) shot in a series of uninterrupted takes on a soundstage with theater sets and a precisely moving camera. Basically, it's a stunt, which Hitchcock himself realized ultimately didn't really work. Star Jimmy Stewart seems to be having a ball, though, which is enough for me.

A world class Broadway tear jerker gets the A-List Hollywood treatment it deserves. In particular, the young Katherine Hepburn is compulsively watchable in her screen debut, and John Barrymore, as the tragic protagonist, actually chews smaller quantities of scenery than was his wont. In fact, it's a genuinely affecting performance (and give or take a Twentieth Century, perhaps his best).

From the play by Isaac Bashevis Singer, who said it best when Dick Cavett asked him about the movie version: "Why are those people singing?"

The Shakespeare play, delivered in translated German by a German cast. The American version, however, features dubbed voices in English -- not speaking the original lines from Shakespeare, but rather translations of the German translations. I think this is what Brecht used to refer to as the Alienation Effect. In any case, the Mystery Science Theater version seen here, with three wise-cracking silhouettes superimposed in front, only adds to the film's surreal charm.

Alrighty, then -- and what would your choices be?