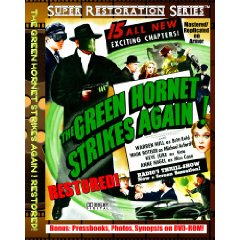 Video Event of the Week: Is it Mighty Mouse: The New Adventures (The Complete Series), a three disc set of Ralph Bakshi's 80s kids show (which rightwing nutcase Donald Wildmon claimed showed the super rodent snorting cocaine) from CBS/Paramount? Could Touchstone's 10 Things I Hate About You, the tenth anniversary edition of the Heath Ledger romantic comedy, conceivably get the nod? Or against all the odds, might Warner Home Video's Super Friends! Season 1 (Volume 1), a two disc set of the 1973 DC Comics cartoon show, by any chance be The One?

All worthy, to be sure (especially the Ledger flick, about which more later), but for my money it's got to be the very spiffy new version of the 1941 Universal chapterplay The Green Hornet Strikes Again!, from the specialists at Restored Serials.

The Hornet, of course, is the classic masked superhero of radio fame (Seth Rogen will be playing him in a big screen version due next Christmas), and TGHSA! was the sequel to the highly successful The Green Hornet serial from the previous year. Most of the supporting cast, including Keye Luke as the Hornet's genius Asian chauffeur, returned, but the part of the titular hero, played in the first one by Gordon Jones, was taken over (presumably because somebody felt he had a little more gravitas) by B-leading man and serial stalwart Warren Hull. Boomers with long memories will probably remember Hull mostly for his later career as a 50s TV star on the bizarre exploitation game show Strike It Rich, but that's a subject for another day.

In any case, a lot of Universal's adventure serials of the period were pretty shoddy compared to the work being done elsewhere (primarily at Republic and Columbia) but this one is an exception; by and large it's a handsomely mounted and genuinely exciting piece of derring-do hokum, with a particularly good Pierre Watkin as the criminal mastermind whose minions are battled by the Hornet over the course of fifteen episodes.

Here's Restored Serials' DVD teaser trailer to give you an idea of a fairly typical end-of-chapter cliffhanger.

Incidentally, the spectacular shipboard fire sequence above is cobbled together (beautifully, I might add) with scenes originally shot elsewhere. My old colleague, film and serial scholar Ed Hulse, writes:

The fire footage is from Fox's 1935 Dante's Inferno, which starred Spencer Tracy and Claire Trevor. The entire film was built around the ship-burning sequence, which consumed most of the budget and weeks of time in building the sets, choreographing the action, etc. The tip-off, to those who've seen Inferno, is the use in the serial of shots showing the lifeboats, on which you can see "S.S. Paradise." That, of course, is the name of the ocean liner Tracy's character builds. (I just double-checked that detail in the AFI Catalog writeup on Inferno, to be 100% sure.) Whatever Universal paid Fox for the footage, they got their money's worth. It also appears in at least two Universal B films, although I can't remember the titles.

As you've probably noted from the clip, Restored Serials has done their usual bangup job with the film, which is crisply transferred (full-frame, unlike some competing versions) and looks all but pristine. There are also some excellent DVD-Rom bonuses included in the package, among them the original pressbook and some beautiful production stills.

Bottom line: If you're even a casual fan of the genre, you really need to order TGHSA! toot sweet, and (conveniently enough) you can do so right here.

Okay, that out of the way, here's an obviously relevant and hopefully fun little project for us all --

Best or Worst Big (or Small) Screen Story Featuring Insects OR a Character Named After an Insect!!!

And my totally top of my head Top Five are...

Charlton Heston versus an army of real army ants. "Take your stinking mandibles off me, you damned dirty arthropod!"

Cronenberg's first masterpiece, I think, and a genuine genre classic if for no other reason than the speech he gives star Jeff Goldbum about "insect politics." Extremely harrowing and, in its own weird way, extremely moving at the same time.

A brilliant documentary on the geniuses at the appropriately named Termite Terrace, i.e. the Warner Bros. animation unit from the Golden Age of Looney Tunes. The above cartoon, prominently featured therein, is one of my all-time fave appearances by the wascally wabbit.

And the numero uno creepy-crawly themed film or flick quite obviously is...

Nobody but nobody does self-absorbed fatuousness like Patrick Warburton. Put him in a ridiculous blue superhero costume and you get comedy gold.

Alrighty then -- what would YOUR favorites be?