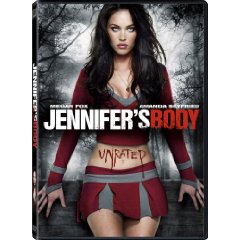 Video Event of the Week: Is it perhaps the 3D versions (DVD and Blu-ray) of New Line's The Final Destination, the fourth installment in the Grim Reaper's Greatest Hits horror series? Might Sony's Blu-ray edition of Cloudy With a Chance of Meatballs, the animated 3D fantasy starring the voice of SNL's droll Bill Hader possibly get the nod (despite being presented here in 2D)? Or could Moon, the slightly artsy sci-fi metaphysical puzzler starring Sam Rockwell and Kevin Spacey and directed by David Bowie's kid Duncan Jones conceivably be The One?

All worthy to be sure, and I'll have more to say about Final Destination and (probably Moon) next week, but in the meantime for my money it's got to be Fox's new DVD of Jennifer's Body, the mildly salacious vampire Mean Girls variant from Juno scribe Diablo Cody I previewed here back in December.

I say that, however, for the most perverse of reasons, because Jennifer's Body is as close to a complete misfire as any film I've seen since I've been writing here. Whatever it's trying to be -- teenage black comedy of manners a la Heathers, gross-out horror, parable of feminist empowerment -- it fails at miserably, and the results bring to mind Vincent Canby's famous 1980 review of Michael Cimino's Heaven's Gate -- Jennifer's Body "is something quite rare in movies these days -- an unqualified disaster." (The difference being, of course, that Canby was wrong about HG, which is a misunderstood masterpiece. But that's piece for another day.)

In any case, the plot:

Insecure nerd chick Anita "Needy" Lesnicki (Amanda Seyfried, better than she needs to be) and titular trollop Jennifer Check (Megan Fox, decorative) have been best friends since childhood, despite having little in common. As the film begins, Jennifer takes Needy to a local dive bar for a show by indie rock band Low Shoulder. A suspicious fire breaks out, killing several spectators, and Jennifer, apparently in shock, is dragged off in the band's van despite Needy's attempts to stop her. It seems Low Shoulder plan to offer Jennifer as a sacrifice to Satan in exchange for fame and fortune. However, Jennifer is not a virgin, and...

Oh, who cares, it's neither coherent or particularly interesting (although it's worth noting that the film's one mordant chuckle comes when the lead singer mentions that the point of the sacrifice is to ensure he gets to be as big as the guy in Maroon 5, which I took as a sly act of rock criticism on Cody's part).

Here's the Gallic version of the trailer, which I've included because a) during my recent Paris adventure posters for the flick were all but ubiquitous in Metro stations around town, and b) because JB's sexual politics, muddled as they may be, could only be more pretentious in French.

As you can see, the film's mix of the seen-it-all-before, the ham-handed and the who-gives-a-crap? is pretty jaw-dropping, and it took me a while to figure why it's as bad as it is. My theory is that Cody got more or less blind-sided by the huge and deserved success of Juno, but that once it happened she realized (probably correctly) that a) she'd never be able to top it and b) people were irrationally jealous of her success and hoping for her to fail. At which point, she figured why not just grind out an ultimately forgettable piece of crap, take the check, and move on.

Okay, like I said, that's only a theory, and who knows? -- maybe this really is some kind of personal statement that just happens to suck. What I do know is that Fox's new single disc DVD features both the theatrical version and the expanded director's cut, and that the former features an audio commentary by director Karyn Kusama and Cody herself. For the record, I should add that I couldn't seem to hear either of their noses growing as they described the putative virtues of the film.

Bottom line: You probably need to see this one for yourself. In which case, you can -- and should -- order it here and god bless you.

Okay, that out of the way and because things will doubtless be a little quiet around here for a couple of days, here's a fun and obviously relevant little project for us all --

And we're not talking Dennis the Menace here, obviously. These should be films about the guys who fit Lady Caroline Lamb's famous description of Lord Byron -- "mad, bad and dangerous to know." Hey -- you gals have all been there, right?

In any case, my totally top of my head Top Five is:

Wagner (ridiculously good looking) is a social-climbing ladykiller (in both senses of the term) who's catnip to copper mine heiress Joanne Woodward in one of the best and most underrated noirs of the 50s (courtesy of director Oswald, one of the most underrated visual stylists of his or any other day).

The King plays Vince Everett, an unscrupulous hustler and amoral delinquent (i.e., exactly the kind of guy the guardians of 50s bourgeois morality thought Elvis actually was) who inspires this priceless exchange with a shocked ingenue (played by Judy Tyler) after he slaps the make on her.

Judy : "How dare you think such cheap tactics would work with me!"
Elvis: "That ain't tactics, honey. It's just the beast in me."

And the numero uno film or flick demonstrating the truth of the late great Bill Hicks's titular assertion is obviously...