Great Lost Films of the 70s: A Room With a View 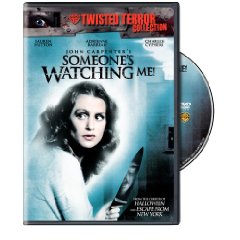 A brief postscript to Friday's entry on John Carpenter's estimable made-for-TV Elvis bio-pic from 1979: As I mentioned, the previous year Carpenter wrote and directed an even more interesting made-for-TV flick that has unaccountably disappeared down the memory hole. I refer of course to the genuinely shuddery and suspenseful damsel-being-stalked thriller Someone's Watching Me!, starring Lauren Hutton, David Birney and Adrienne Barbeau (the future Mrs. Carpenter) as a wise-cracking lesbian (woo hoo!!!)

L.A. newcomer Leigh Michaels (Hutton) moves into a chic high-rise apartment building. She loves the view; unfortunately, so does the Peeping Tom who lives somewhere in the adjacent tower. As a result, the move is just the beginning of terrors that escalate from anonymous phone calls and gifts to lights that mysteriously flicker and the realization that every moment of her life is being observed. When the cops refuse to take her seriously, Leigh is forced to fight back, matching her tormentor's obsession with her own relentless drive to uncover his identity The prey is now predator -- and that escalates the stalker's game to a whole new level. And by "new level," of course, we mean that somebody is going to get stabbed with a piece of broken glass sooner or later.

Sorry about that last little spoiler, but you'll probably have guessed some sort of stabbing is in the pipeline a good half and hour before it actually happens.

Meanwhile, here's the opening sequence to give you an idea of the film's creepy mise-en-scene.

As you can see from the above, this is a fairly blatant low-budget Hitchcock homage, from the faux Saul Bass title credits (a thrift shop version of the opening to North By Northwest) to Harry Sukman's occasionally Herrman-esque score to Carpenter's rather elegant camera moves. This was the writer/director's first work for a major studio and he has some interesting and amusing things to say about the experience in a bonus documentary that comes with the Warner DVD version (grizzled vet cinematographer Robert Hauser told him that he hadn't looked at dailies since 1951 and the first time he shot in color). In any case, Someone is obviously derivative, the big surprise ending is a bit of a let down, and throughout there are some punches pulled due to the constraints of network television. But Carpenter manages some nifty scare moments nonetheless -- there's a shot of the bad guy sneaking out of frame past the unaware Hutton that made me sit bolt upright, just as it had when I last watched the film in 1978 -- and by and large it's a worthy addition to its auteur's canon. Which is to say I'm glad that Warner finally made it available after years of languishing in home video limbo.

The single disc DVD, from 2007, is out of print, but the film is currently included on a 2008 box set with some other B-obscurities. In any case, you can -- and definitely should -- order Someone's Watching Me! over here.