How Bad Could It Be?: Dr. Tongue's 3D House of Gutting You Like a Fish 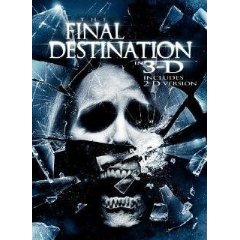 Well, I finally got around to watching New Line's DVD of The Final Destination, the fourth (2009) installment of the popular snuff film series, now in digital 3D (woo hoo!) I managed to miss this one in the theaters (deliberately if truth be told) but I've been a fan of 3D flicks since the time I saw a wagon train crash its way off the screen and into the darkened vastness of the Hackensack Oritani Theater in the John Wayne western Hondo back in 1952(!). And more recently, tout le monde has told me that, post-Avatar, 3D is once again the future of cinema, if not all life as we know it. Plus, the thing is directed by David R, Ellis, a screen immortal since having performed similar duties on the incomparable Snakes on a Plane, so I figured I should probably give the disc a look.

The plot (adapted from a certain on-line encyclopedia with very little credibility):

Stereotypical horny twenty-something Nick O' Bannon (Bobby Campo) is at the McKinley Speedway watching a race with his friends Hunt Wynorski (Nick Zano), Janet Cunningham (Haley Webb) and girlfriend Lori Milligan (the improbably monikered Shantel VanSanten). Nick has a premonition of cars crashing and debris flying into the stands, killing all of his friends and others in the 180 section of the stadium. He persuades his friends to leave, but everything else happens pretty much as it did in his vision, and eventually just about every other bad actor Nick has ever encountered gets offed in increasingly gruesome Rube Goldberg-esque ways. The End -- or is it?

Here's the trailer, to give you a little idea of how that all plays out.

Anyway, cutting to the chase, the answer to our earlier question is "The concept of 'good' or 'bad' in the context of one of these films is somewhere between irrelevant and meaningless." Either you like this kind of stuff or you don't, and whether or not TFD4 delivers the exploitation frissons compared to the earlier episodes more or less comes down to how jaded you are. Let's just say that watching people get impaled and crushed to death in 3D is incrementally more interesting than it is in 2D (the disc also includes the flat version of the film) but that either way it's hard to take seriously; it's not like there's any sense of pity, or terror, or tragedy. Essentially, this last (please God) Final Destination is just a very loud and occasionally gory 80 minute live action Road Runner cartoon, only without the laughs. On the plus side, however, I will stipulate that Mykelti Williamson, as a speedway security guard, has a certain gravitas that most of the other actors lack, and that at least there are fewer obnoxious ethnic stereotypes than there were in 2012.