How Bad Could It Be?: Future Shlock 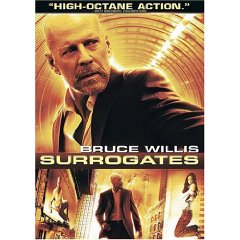 Just finished watching the new Touchstone DVD of director Jonathan Mostow's Surrogates, the 2009 sci-fi action thriller (based, like just about everything else these days, on a comic book mini-series) starring increasingly protracted in the molar Bruce Willis as a futuristic cop. I had missed this one in theaters, and to be honest the trailer (see below) struck me as deja vu, and not in a good way. Still, since Willis (who at this point can probably play roles like this in his sleep, and probably already has) remains (for me at least) a reliably enjoyable screen presence, plus Ving Rhames is on board as as a sort of Matrix-ian Morpheus figure and James Cromwell plays a mad scientist, I figured I should probably give the disc a look.

The plot (via the DVD box):

In the not-too-distant future, where people experience life through perfect surrogates -- unflawed robotic versions of themselves, controlled from the safety of their own homes -- murder is a thing of the past. BUt when a college student linked to the guy who created the replicants (Cromwell) is killed, an FBI agent (Willis) must re-enter reality and risk his to life to unravel the mystery. In the battle of technology versus humanity, who can you trust?

Here's the aforementioned trailer, to give you a smidge of an idea.

Anyway, cutting to the chase, the answer to our earlier question is "Surprisingly and quite annoyingly bad." As you may have already guessed, it's cobbled together with visual and thematic ideas rather over familiar from countless sci-fi films both good and bad -- The Matrix, Wall-E, Soylent Green, Avatar(!), plus a bunch of silly Italian drive-in flicks of the 60s like Wild Wild Planet (and those are just top of my head). The fact that it's derivative, however, isn't really the problem (although after a while the film's obvious lack of imagination begins to grate); the problem is that it's ugly (if you like fisheye lenses and garish color schemes, this is the film for you!) and an incoherent mess. Frankly, I pretty much lost patience with it after I realized I had already seen its opening Nightclub From Hell sequence on last week's premiere of the Battlestar Galactica spinoff Caprica, and the fact that Ving Rhames isn't even introduced till the middle of the film didn't improve my mood any. Helmer Mostow previously did the very entertaining paranoid revenge thriller Breakdown (with Kurt Russell) and the third Terminator film, which didn't completely suck; Surrogates, however, is apparently the first thing he's done strictly as a director for hire and its overall crappiness can probably be explained either by the fact that his heart simply wasn't in it, or that the first two were flukes.

Extras with the package include a music video by voice of their generation Breaking Benjamin, who may be the most ridiculous band of the last ten years, as well as an audio commentary by Mostow that's actually more interesting than the film itself.

Bottom line: You can order it, if you must (you're a Radha Mitchell completist, perhaps?) here.