How Bad Could It Be?: There's No Such Thing as a Free Brunch 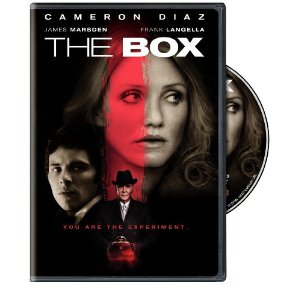 Just got finished watching Warner Home Video's new (out yesterday) DVD of The Box, the 2009 puzzler starring Cameron Diaz , James Marsden and Frank Langella. I managed to miss this one in the theaters -- not sure why, exactly -- but given that the cast is aces and the director is Richard Kelly, who did the unsettling and original Donnie Darko, it seemed designed with my mind in mind. Plus, it's based on a short story by the great Richard Matheson, the author of so many classic sci-fi, fantasy and horror tales eventually made into cool TV shows and movies that I have long since forgiven him for having also written the novel that What Dreams May Come was based on.

So I figured I really ought to give the disc a look.

Push a red button on a little black box, get a million dollars cash. Just like that, all of Norma (Diaz) and Arthur (Marsden) Lewis's financial problems will be over. But there's a catch, according to the strange visitor (Langella) who placed the box on the couple's doorstep: Someone somewhere -- someone they don't know -- will die. Norma and Arthur are confronted by agonizing temptation, yet unaware that they're part of an orchestrated and (for them and us) mind-blowing chain of events.

Voila -- the trailer, to give you a little idea of how said events play out.

Anyway, cutting to the chase, the answer to our earlier question is "Oy gevalt." A lame Twilight Zone episode padded out to nearly two hours, The Box is such an incoherent mess -- is Langella's character an alien? Possessed by aliens? A messenger from the vengeful God of the Old Testament? An escaped lunatic? A disgruntled ex-postal employee? Who knows? Who cares? -- that it's hard not to wonder if the director's earlier film was the result of a deal with actual supernatural forces of the sort that may or may not be at the heart of the story here. In fact, about the nicest thing I can say about The Box , which is set in 1976, is that it gets all the little period details exactly right. Of course, this means that star Diaz has to swan around in some of the most authentically heinous outfits you've ever seen, but at least they distract from the cockamamie portentousness of the rest of what's onscreen. And speaking of cockamamie portentousness, the film deserves numerous demerits for the orchestral score by a couple of the guys from overly grandiose alt-rockers Arcade Fire; the last time I heard music with a similar level of subtlety, it accompanied a film of a guy with a handlebar mustache tying a hysterical blonde to the railroad tracks.

Bottom line: One of the bigger misfires in recent memory. If you're curious, you can order it here and God bless you.