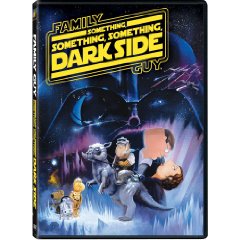 Okay, it may have gotten overlooked temporarily during the whole Avatar unpleasantness of recent weeks (heh!), but if truth be told I'm a bit of a fanboy just like everybody else. You know -- I'm not a Trekkie, I just have the pajamas and that's it.

Anyway, as it happens, the other day I was watching (for the third time, and I'm not ashamed to admit it) the recent and utterly hilarious Family Guy parody of The Empire Strikes Back, the charmingly monikered Something, Something, Something, Darkside. And just so you know where I'm coming from, let me reitirate what I said in my review -- that while I was as blown away by Star Wars in 1977 as everybody else, my affection for the franchise has been in precipitous decline since the release of pretty much all of the films since then. And, frankly, as funny as Something... is, it's obviously made by people who are actual Star Wars geeks, and I would have preferred a slightly more vicious satire.

In any case, while I was watching it again, to my surprise something sort of jumped out at me.

To wit, in the parody of the next to last scene on the Millenium Falcon, Star Wars character Lando Calrissian, played by Family Guy character Mort Goldman (voice of John G. Brennan) says: "Don't worry, we'll find Jabba the Hutt and that bounty hunter and we'll get Han back."

And you know what -- I pulled out an old laserdisc of the film I had lying around, and darned if he isn't right. Billy Dee Williams IS wearing one of Harrison Ford's outfits, and it is weird. 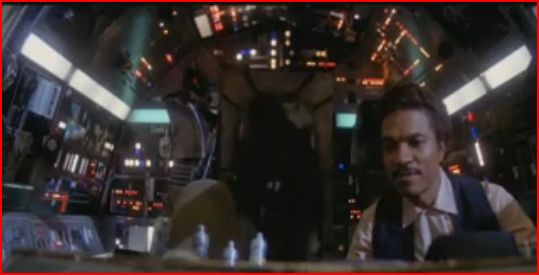 No larger point, here. Just thought you'd like to know, one fanboy to another.