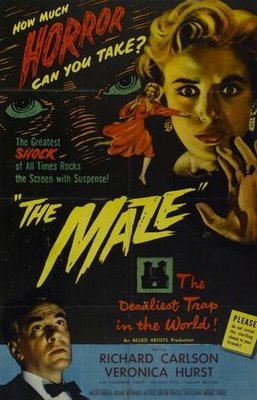 Okay, I've written about this one before, but given yesterday's discussion of the preposterous plot reveals at the hearts of The Wolfman remake and Martin Scorsese's Shutter Island, it seems like time to put things in perspective, surprise ending-wise. Besides, it gives me a chance to agitate, once again, for the long overdue release of a certain wiggy masterpiece on DVD.

I refer, of course, to The Maze, a 1953 thriller in 3-D and astoundingly unreal Cinecolor, directed by the incredibly great William Cameron Menzies.

Here's the trailer -- in black-and-white, alas, but genuine three dimensions -- to give you a feel for the thing.

Seriously...if you've got a pair of those red/blue glasses from a video of a recent 3D flick, like Final Destination, go put 'em on and check this out!!

The plot of The Maze, rather deliberately given short shrift in the trailer, begins with a classic Gothic set-up. Regular guy Scotsman Gerald McTeam (Richard Carlson) is about to be married to his long-time sweetheart Kitty (Veronica Hurst) when he gets a mysterious note imploring him to come to Craven Castle, the ancestral home of a dying distant cousin. After Gerald has been gone for several weeks it dawns on Kitty and her aunt (Katherine Emery, who narrates the film) that Gerald isn't coming back. The two women head to the castle, where Gerald -- gone shockingly old -- initially refuses to see them. But the two women connive to get to the bottom of the mystery, the solution of which seems to lie somewhere in the huge titular maze in the rear of the estate, where every night Gerald and the servants conduct a bizarre ritual (dramatized by Menzies in fabulously spooky style, with some very subtle, but highly effective, use of 3-D perspectives).

Eventually, all is revealed, and in the most outrageous twist in movie history we learn that Gerald's cousin, the actual Laird of the Manor, is a pitiable genetic freak. By which I mean, a giant mutant frog with the brain of a man who the denizens of the castle have been tasked to care for in secret for the remainder of his life. And by caring for, I mean taking him out for a daily swim in the lily pond at the center of the maze.

No, I am not making this up. Let me repeat -- the secret of The Maze is that the Laird of the Manor is a frog.

That Menzies is better known for art-directing Gone With the Wind than helming this is, of course, one of the great historical ironies, but in any case it's absolutely criminal that there has never been a home video release. Speaking as somebody who was lucky enough to see the 3D version theatrically -- Film Forum hosted a pristine print back in the late 80s -- I can tell you that it's an unforgettable experience. I mean, really -- anybody who thinks Avatar in IMAX is a big deal needs to see this pronto.