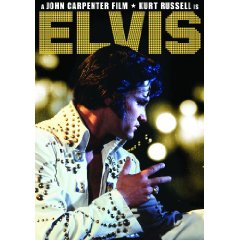 Video Event of the Week: Are we perhaps talking about Sony's Blu-ray of Zombieland, the splatter horror comedy starring Woody Harrelson and Jesse Eisenberg? Could Fox's DVD of Amelia, with Hillary Swank as America's Sweetheart of the Air, possibly make the cut? Or, and I think you can guess where I come down on this, might Universal's various discs of Love Happens, the putative romantic comedy starring Aaron Eckhart as a self-help author who falls in love with florist Jennifer Aniston, by any stretch of the imagination conceivably be The One(s)?

All worthy, except for that last (which is really quite awful), but for for my money it's got to be Shout Factory's first-time-on-DVD version of Elvis, the 1979 made-for-TV bio-pic directed by John Carpenter and starring Kurt Russell as the King.

Given the countless books (the most recent and interesting being Alanna Nash's Baby, Let's Play House) and general media hoo hah about Elvis in the years since his 1977 overdose, the details of his life seem today about as overfamiliar as The Illiad and The Odyssey, or perhaps the Nativity story. Which is to say that Carpenter's Elvis (which, mercifully, ends with the triumphant 1969 comeback) doesn't feel as minty fresh as it did when it was first broadcast. At the time, however, it was a bit of a revelation, and with a couple of cavils it holds up pretty well, in large part because of Russell, who seems to get Presley on an existential level. (The vocals are by country star Ronnie McDowell, a Presley emulator who also provides a reasonably interesting running commentary on the disc's supplemental audio track).

Here's a clip from the DVD to give you an idea -- Russell (and McDowell) doing a very credible version of Elvis in his Le Roi Soleil period doing "Blue Suede Shoes."

The screenplay, by producer Anthony Lawrence, goes a little heavy on the Freudian Elvis-and-his-dead-twin-brother stuff, and Shelley Winters, as Gladys Presley, is perhaps a bit much in the smothering mom department. But mostly the film -- despite the limitations of its TV budget -- feels authentic, and there are a lot of terrific performances along the way. Bing Russell, the star's real life dad, is particularly good as the hapless Vernon Presley, as is Pat Hingle as Colonel Tom.

Shout Factory's video transfer derives from the original film elements, which seem to have survived in pretty good shape; it would have been nice if the soundtrack had been remixed for stereo, but alas you can't have everything. Bonuses with the set include a fairly standard 1979 making-of doc (bleached out, but watchable) and a wonderful excerpt from a 1964 American Bandstand "Elvis Day" episode. I should also add that just prior to Elvis Carpenter did another made-for-TV flick -- the genuinely creepy and suspenseful Someone is Watching Me -- which has pretty much disappeared down the memory hole; I'll be writing it about it here next week.

In any case, you can -- and absolutely should -- preorder Elvis here.

Best or Worst Film Inspired by the Life of an Actual Person!!!

Anthony Perkins as bipolar baseball great Jimmy Piersall. Big problem: As they used to say back then, the star throws like a girl.

Cary Grant as uber-urbane songwriter Cole Porter, who in this telling, of course, is like totally not gay.

Alan Rickman is wonderfully supercilious as Steven Spurrier, a Brit oenophile snob who invented the Judgement of Paris wine tasting contest that put the Napa Valley on the map in 1976. Future Star Trek Captain Kirk portrayer Chris Pine is also very good as another real life character (the rebellious scion of a vintner played by Bill Pullman) but his 70s mullet wig is a bit of a distraction.

And the numero uno cinematic essay inspired by a real guy or gal unquestionably is... 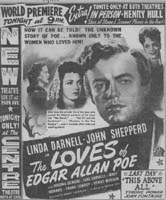 Possibly the worst Hollywood bio-pic of them all, but on balance a must-see for one truly jaw-dropping scene. Star John Shepperd as Poe, desperate to get money to buy drugs for his ailing wife, takes a sheaf of poetry to the editorial offices of The Atlantic. Editor in Chief guy skims them while Poe waits, and then actually says "'Once upon a midnight dreary'.....? What the hell is this? Sorry, Ed, can't use it." I am not making this up, honest, although I can't find a YouTube clip to prove it.