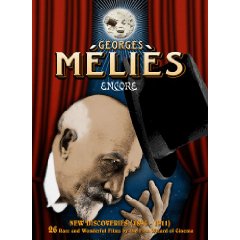 Video Event of the Week: Are we perhaps talking about Lionsgate's new Blu-ray version of Alexander McKendrick's hilarious 1955 Ealing comedy The Ladykillers, starring Alec Guiness? Might MGM/UA's Blu-ray update of William Friedkin's underrated crime drama To Live and Die in L.A. (from 1985) possibly make the cut? Or against all the odds and everything that's holy might Overture/Anchor Bay's various discs of Law Abiding Citizen, yet another sadistic revenge thriller wasting talents like Gerard Butler and Jamie Foxx, conceivably be The One(s)?

All worthy (except for that last, obviously) but for my money it's got to be George Melies: Encore (New Discoveries 1896 - 1911), a fascinating collection of 26 rare and heretofore unseen films by the great cinema pioneer from the restoration experts at Flicker Alley.

This is, of course, the sequel to a five-disc Melies box Flicker Alley did in 2008; since then, these new films turned up (including two by Segundo de Chormon, which had been misidentified as by Melies for years) and they're presented here in chronological order, with effective new music scores and (in a couple of cases) with spoken narrations, in both French and English, written by Melies. The films themselves (the longest is The Diabolical Church Window, which runs a little over seven minutes) are beyond charming; they range from slapstick comedies to historical tableaux (The Wandering Jew, illustrated below), with most of them featuring the early trick photography that remains a Melies trademark. The print quality is variable, obviously, but most of the shorts look quite good (An Hallucinating Alchemist, from 1897, is all but pristine); if I had to pick a favorite, it would probably be Le Dirigible Fantastique (The Inventor Crazybrains and his Wonderful Airship), a 1907 dreamscape that conveys more of a sense of wonder in two brief minutes than the entirety of a recent 3D blockbuster whose name I need not mention. Alright, I'm kidding about that last comparison, but the Melies is a visionary piece of work by any standard. 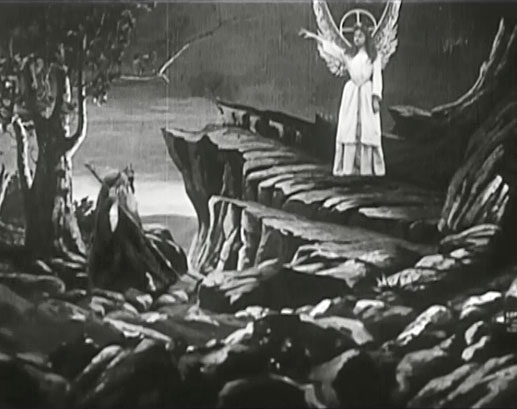 There's nothing from the set up on YouTube alas, but you can watch two of the films -- the hand-colored Spider and the Butterfly (1909) and the vaudevillian Off to Bloomingdale Asylum (1901) over at Flicker Alley's website here.

In any case, this is a wonderful collection and, if you have even the slightest interest in early cinema, an essential one. You can -- and very definitely should -- order it either at the Flicker Alley link above or over at Amazon.

Okay, that said, and because thing will doubtless be a little quiet around here for a few days, here's a fun and hopefully relevant (albeit not to Melies) little project for us all:

A Poe adaptation, obviously, with (duh) Vincent Price. "The thousand injuries of Fortunato I had borne as I best could; but when he ventured upon insult, I vowed revenge..." 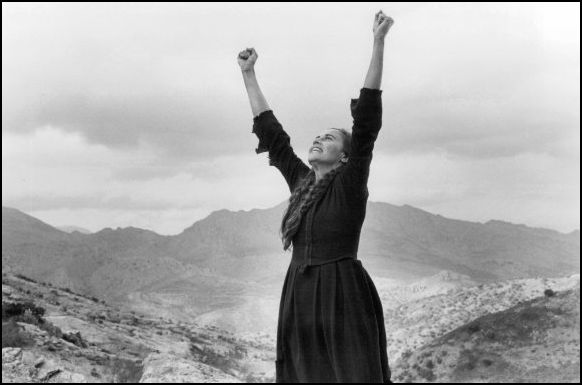 A terrific version of the Nicolas Gage memoir. I think I mentioned this the other day, but in Taiwan, this was re-titled Revenge For My Mom After Many Years. Seriously.

What can I tell you -- I always felt that Clare Quilty (Peter Sellers) had it coming.

Middle-aged broads get back at the miserable SOBs who dumped them. Actually, this isn't all that great a movie, but the following exchange has always cracked me up.

Brenda: Let's examine the evidence. Look! all bottles and gallon jugs!
Elise: I had guests!
Brenda: Who? Guns N Roses?

And the numero uno a-dish-best-served-cold flick of them all obviously has to be....

To be honest, if they stuck me in a pool at Sea World surrounded by gawking tourists all day, I'd want to get even with somebody too.