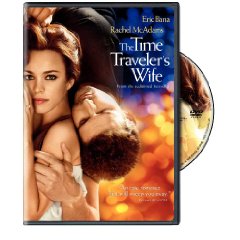 Video Event of the Week: Are we perhaps talking about Universal's Blu-ray of A Serious Man, the latest it's-a- thin-line-between-comedy-and-tragedy offering from those wacky Coen Brothers, Joel and Ethan? Might the Warner/BBC DVD edition of Emma, the television adaptation of the Jane Austen novel starring Johnny Lee Miller and Michael Gambon, possibly make the cut? Or could Bushido: The Cruel Code of the Samurai, the DVD version of the 1963 Japanese film from Animeigo, by any chance conceivably be The One?

All worthy, to be sure, especially the Coen Brothers laff riot, but for my money it's got to be New Line's DVD of The Time Traveller's Wife, the sci-fi chick flick romance starring Eric Bana and the toothsome Rachel McAdams.

The plot (adapted from the blurb on the DVD box and the interestingly incoherent summary at IMDB):

When Henry DeTamble (Bana) meets Clare Abshire (McAdams) in a Chicago library they both understand that he's a time traveller, but she she knows much more about him since he hasn't yet been to the times and places where they've already met. Got that? Good. Anyway, he falls in love with her, as she has already with him, but his continuing unpredictable absences -- his time travelling is involuntary, like epileptic fits -- and his increasing knowledge of the future makes things difficult. Still, Clare and Henry treasure the moments they have together, imbuing them with the yearning and passion of two people imprisoned by time...and set free by love. Cue treacly music. The end.

I have to confess, this movie completely flummoxed me; I haven't a clue as to what the people who made it thought they were doing. Well, actually, I do up to a point; as you have obviously guessed by now, it's what used to be called High Concept, said concept encapsulated perfectly, if unimaginatively, in the most depressingly literal title since the Taiwanese version of Eleni was renamed Revenge For My Mom After Many Years.

Anyway, the whole thing is just surpassingly odd in all sorts of ways, starting with the characters; to a person, they are either weirdly unfleshed out or such shorthand cliches that it's sort of surreal, like watching Kabuki theater or something. McAdams' heroine, in particular, seems to have no inner life at all and to exist onscreen for no other reason than to look adorably doe-eyed (to be fair, something she manages with aplomb), while Bana's troubled artist father (Arliss Howard) is little more than a dyed Johnson & Johnson Cotton Ball fake beard with feet.

As for the story, it's similarly...well, I don't have a word for it. Let's just say that the central plot gimmick of Bana's tituar time travelling is handled almost offhandedly; all concerned wind up treating it not with awe or anger or terror but, rather, as a mild annoyance, certainly no more of an impediment to a stable relationship than if the guy had a gig as a travelling salesman and had to be on the road a lot.

I could go on at length about the film's ineffable weirdness (at times, I felt like I was on acid watching an episode of Star Trek: Voyager dubbed in Icelandic), its jarring lifts from other genre pics (when Bana time travels, he disappears out of his clothes, sorta like The Terminator) and its recurring motif of bad makeup jobs (hey -- at least nobody wears executive producer Brad Pitt's prune suit from Benjamin Button). But you probably wouldn't believe me.

That being the case, here's the trailer, to give you at least a little idea.

I should add that New Line's DVD package includes a making-of documentary in which none of the film's creative team, including the two stars, screenwriter Bruce Joel Rubin and director Robert Schwentke seem to be describing the movie that I actually think I saw. So I'm willing to concede that The Time Traveller's Wife is, conceivably, a serious and moving romance with interesting things to say about life and death and love, as opposed to the camp classic hoot that I believe it will be considered in the not too distant future.

In any case, you can -- and definitely maybe should -- order it here and decide for yourself.

The Movie -- Good, Bad or Embarrassing -- That Always Makes You Cry!!!

I've seen this one countess times, and I've written at length about it before, but I just watched the above clip and as always, I totally lost it. The end of the world and the end of an affair, and I'm not sure which is more tragic and moving.

Hey -- be thankful I didn't put up a clip of Tommy Kirk having to shoot Old Yeller.

True story: In 1993, a friend of mine was on a plane from L.A. to New York, sitting behind the entourage of some former members of gangsta rap icons N.W.A., and Homeward Bound was the in-flight movie. By the time the Siamese kitty voiced by Sally Fields was swept away in a raging torrent, several of the rappers were sobbing uncontrollably, and one of them was heard to yell "Don't die, little pussycat -- don't die!"

The late great Jean Simmons, and a genius score by Alex North. If this doesn't reduce you to blubber, I probably don't want to know you.

And the numero uno flick that always massages my tear ducts is...

When she gives him the sweater, I turn to Jell-O. Hey, what can I tell you, she really loves the big dope, So I'm a romantic -- sue me.