How Bad Could It Be?: Cottage Cheese in a Blizzard 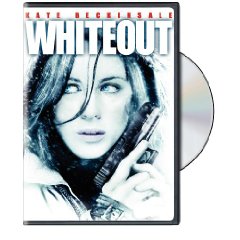 Well, I finally got around to watching Warner Home Video's recent DVD of Whiteout, the 2009 thriller adapted from a graphic novel and starring the elfin yet pulchritudinous Kate Beckinsale. I managed to miss this one in the theaters -- I'm beginning to be allergic to anything remotely resembling a comic book movie -- but I've been a fan of Beckinsale's since forever, or more accurately since her almost debut opposite Aidan Quinn in Haunted, an excellent old-fashioned ghost story in which she was briefly and memorably naked (thus establishing a career arc that continues to this day). Plus, Tom Skerritt is the co-star, and he remains one of the most reliably entertaining macho leading men of our day; I've been a fan of his since...wow, since M*A*S*H, now that I think of it.

So I figured I really ought to give the disc a look. You know -- how bad could it be?

The wind hammers at 100 MPH. The temperature plummets to -120ºF. Nature doesn't intend for people at Amundsen-Scott Research Station to survive Antarctica. Neither does a mysterious killer who has committed the first-ever murder on that most remote of continents...and who will certainly kill again. U.S. Marshal Carrie Stetko (Beckinsale) is plunged into a shocking (and shockingly routine) mystery and races to solve it before being stranded with six months of winter darkness -- and a murderer -- closing in.

And here's the trailer to give you an idea of the film's frosty charms, if that's the word.

Anyway, cutting to the chase, the answer to our earlier question is "about as bad as you can get without the sort of preposterous continuity problems you find in Ed Wood movies." Actually, there may in fact be several such problems, but it's impossible to tell, given that director Dominic Sena, fresh from the triumph that was 2001's Swordfish, took the film's title seriously enough to stage almost every big scene in a blinding snow-reflective glare. In fact, by the time you get to the seemingly endless lame climax -- described, charitably, by my colleague Mark Keizer as featuring "three characters, almost totally obscured by their winter clothing, fighting in near-obscurity in a raging storm," you'll most likely be rummaging furiously in your coat pocket in search of a Visine bottle. In Sena's defense, however, he does work in a very soothingly lit and charmingly gratuitous early sequence of Beckinsale undressing for a shower, so perhaps the picture isn't a total loss.

In any case, you can -- and if you do, you are starved for entertainment in ways that would make me very, very nervous -- order Whiteout here.