How Bad Could It Be?: Pardon Me, But Your Teeth Are in My Neck 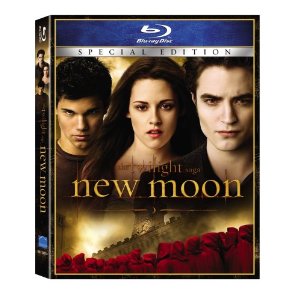 Well, I just killed a couple of hours with Summit Entertainment's new Blu-ray special edition of New Moon, the second installment of the blockbuster teen vampire saga. I missed the film itself in the theaters, largely because the first episode (which I actually shelled out money to see) left me conspicuously cold (an Abstinence Only vampire flick? Wow, there's a genuis concept). But I have a serious (and admittedly inappropriate) thing for star Kristen Stewart, and of course once I learned that the supporting cast of this one includes the seriously great Michael Sheen, not to mention Dakota Fanning and the adorable Anna Kendrick (who all but stole Up in the Air out from under George Clooney) I figured I probably ought to give the flick a look.

The plot (adapted from the video box):

In the second chapter of Stephenie Meyer's best-selling Twilight series, the romance between mortal Bella Swan (Stewart) and vampire Edward Cullen (Robert Pattinson) grows more intense as ancient secrets threaten to destroy them. When Edward leaves in an effort to keep Bella safe, she tests fate in increasingly reckless ways in order to glimpse her love once more . But when she's saved from the brink by her friend, Jacob Black (Taylor Lautner), Bella will uncover mysteries of the supernatural world that will put her in more peril than ever before. Oh, and there's a lot of werewolves in there too, plus some wispy indie rock on the soundtrack.

And here's the trailer to give you an idea of the film's sexless but overwrought vibe.

Anyway, cutting to the chase, the answer to our earlier question is mostly just kind of boring, but I've seen worse. To be fair, of course, I'm not exactly the film's intended demographic, so I'm probably immune to whatever charms it has. To my taste, however, the thing is glacially slow -- it takes what seems like at least the eternity the film's undead have been around before the CGI werewolves show up -- and the rest of its seemingly eight hour running time mostly comes down to a lot of rainy Northwest landscapes, Pattinson looking wan and Byronic, and Stewart either dying for love or having a bad case of gas. I should also add that the aforementioned supporting cast is mostly wasted in thankless roles (Sheen, in particular, looks faintly embarrassed throughout) and director Chris Weitz stages what is, definitively, the single worst "time passes slowly" montage in the history of film; for that achievement, I can only offer amazed kudos and huzzahs.

Summit's Blu-ray, however, is a pretty spiffy advertisement for the medium, with absolutely sensational picture and sound. De rigeur bonuses on the disc that did, as you can imagine, very little for me include an audio commentary by Weitz and film editor Peter Lambert, a backstage making-of doc that only feels longer than Berlin Alexanderplatz, and rehearsal footage of whey-faced Brit rockers Muse, who may in fact be the dullest band on the planet at the moment.

As I said, though, I'm probably the wrong guy to ask about Twilight. In any case, if you're curious about what all the fuss is, you could probably do worse than order the thing over here.