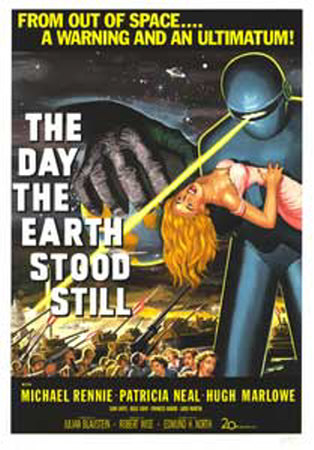 Caught Hancock at my Hell Octaplex over the weekend (short review: Mostly amusing, ultimately cops out on an intriguing premise) and was rewarded for my troubles by the trailer for the forthcoming (December 12th) remake of Robert Wise's 1951 The Day the Earth Stood Still, one of the handful of science fiction films that genuinely deserves the appellation "classic."

Now I must admit that when I first heard this was in the works, I was, shall we say, skeptical; the original has so many iconic aspects, not the least of which are Gort, the awesome cyclopean robot, and the fabulously spooky genre-defining score by the great Bernard Herrmann (good luck topping that, Tyler Bates) that I basically figured the project was DOA no matter what. Now, however, to my surprise I'm borderline hopeful, thanks to some casting -- the always appealing Jennifer Connelly in the Patricia Neal role, Monty Python's John Cleese, an inspired choice for the eccentric scientist originally played by Sam Jaffe -- that doesn't suck.

Not a bad trailer, right? I especially like the tantalizing little glimpse of the new Gort at the end, and it appears they haven't totally mucked up the story, so yeah -- I'm borderline hopeful. Still, and I say this as someone who defers to no man in my admiration for Bill and Ted's Excellent Adventure, as you can see from the clip we're nonetheless left with one teensy weensy problem. To wit: The movie's central character Klaatu, the alien messenger who carries the narrative and who was played in the original by the wonderfully otherworldly Michael Rennie -- 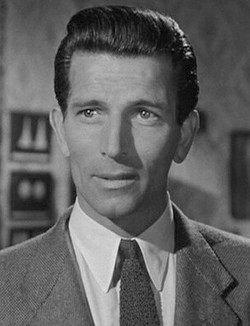 -- is being portrayed in the remake by Keanu Reeves... 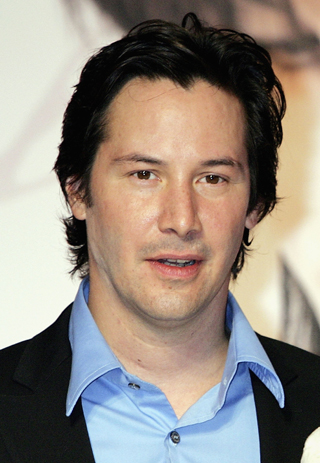 ...who I think we can all agree is about as otherworldly as the average stock boy at Targets.

Coming tomorrow: My thoughts on the upcoming remake of The Monster That Challenged the World, featuring Chris O'Donnell as the titular giant mollusk!