Monday Minority Report: Voyage to the End of Your Nose 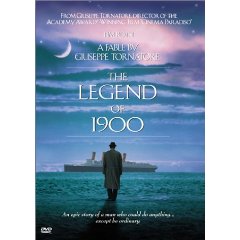 And from our department of Movies Nobody Seems to Like But Me, allow me to put in a good word for The Legend of 1900, a sweepingly romantic sea-going meditation on Art, the Meaning of Life and Dramamine that just about knocked my socks off when it opened in 1998, but which was otherwise greeted with more or less the same enthusiasm from my critical colleagues that you might normally associate with a loathsome communicable disease.

From my review at the time:

Visually dazzling, touching and funny, this first English film by Cinema Paradiso auteur Guiseppe Tornatore boasts a knockout Chaplin-eseque performance by Tim Roth and a seraphically lovely score by Ennio Morricone. Tornatore's fable (his word) takes place almost entirely aboard the Virginian, a mammoth luxury liner. Coal room worker Bill Nunn discovers an abandoned baby on the first day of the 20th century, decides to keep him secretly and names the infant 1900. Eight years later, after a freak accident orphans the boy, something astonishing happens; out of nowhere, little 1900 develops the ability to play piano like a master. He's allowed to stay on the ship, entertaining passengers and crew as it sails back and forth between Europe and the U.S. And by the time he's 20, when he's befriended by an American sax player (Heavy's Pruitt Taylor Vince), it's clear that this is one genius/naif who will never, ever, get off the boat. Metaphor for the human condition, anybody? Well, yeah, but Tornatore doesn't flog it. He instead keeps things moving with a nifty subplot involving a mysterious record cut by 1900; a great 2nd-act piano duel between 1900 and a jealous Jelly Roll Morton (Clarence Williams III)...

...and what seems like an endless succession of breathtaking visual set pieces. If any of this reminds you of another recent big ocean liner movie with an award-winning score, forget it; Tornatore packs more genuine poetry and feeling into his opening sequence - the Virginian pulling into New York harbor as the Statue of Liberty suddenly emerges from the fog - than you'll find in the entirety of Titanic.

Having just sat through 1900 for the first time since I saw it originally, I'm pleased to say that I stand by every word of the above; this is a gorgeous, one of a kind movie experience and if there's a Cult Film God in heaven, this will start turning up on people's lists of most inexplicably overlooked flicks of the 90s sooner rather than later. I should also add that I'd forgotten the above cheap shot at Avatar auteur James Cameron; the fact that I took it at all, not to mention more than a decade before he helmed The Worst Movie Ever Made©, has been a source of enormous retroactive pride for me.

Okay, just kidding about the whole Cameron thing. In any case, if you're at all curious after all that, you can (and should) get thee over to Amazon and order a DVD of 1900 here.