And speaking of Iron Man , as apparently all of us are after this weekend's returns, I don't know where you guys come down on the whole Gwynneth Paltrow thing, but I think we can agree that in the scene at the reception where she gets all dolled up to catch Robert Downey's eye she looks quite astonishingly beautiful. That said, I have two words: Blythe Danner.

That's Gwynneth's mom, of course, for whom I must confess I have carried a life-long torch from the minute I saw her in a 1976 PBS production of Tennessee Williams' Eccentricities of a Nightingale (a vastly superior re-write of his more famous Summer and Smoke). Danner never really became a movie star, although she's had a more than estimable film career (genre fans will recall her brief turn in the X-Files movie), but for me at least her heart-breaking repressed Southern belle in Eccentricities is one of the greatest performances ever. Of course, she's assisted in no small measure in the part by her leading man, the young Frank Langella; the chemistry between them is palpable, and to be quite honest he's almost as gorgeous as she is, albeit in a more Byronic rockstar way. In any case, if you're looking for a thinking man's sex symbol, you have no further to look than the thankfully still available DVD version. Highly recommended doesn't really begin to describe it. 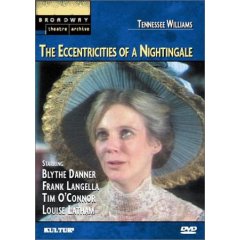