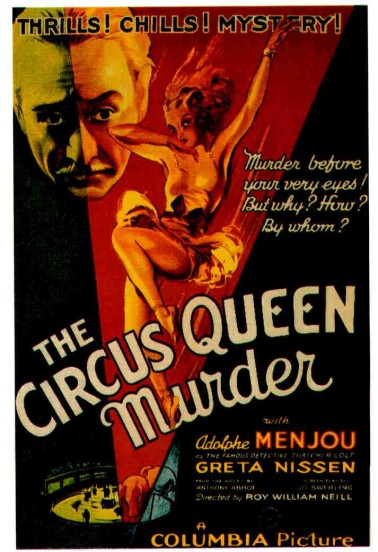 The most interesting by far is the appealingly sleazy B thriller The Circus Queen Murder, the second of a two film series starring Menjou as lip-reading Police Commissioner Thatcher Colt (a period gentleman detective in the mold of Philo Vance).

Suave but overworked head cop Colt decides to get away from the big city for a while, so he and his secretary, Miss Kelly (Ruthelma Stevens) hop on a train for an upstate NY town called Gilead (no, they're not married -- I told you this was pre-Code). They plan an uneventful vacation/tryst, but when a small time circus rolls into town they soon find themselves caught up in a sordid tale of marital infidelity, murder, cruelty to animals, and cannibalism (have I mentioned this is pre-Code?)

Along with Menjou, a right-wing troglodyte who informed, gleefully, on some of his colleagues during the post-war Red Scare and is mostly remembered today for his role as a morally compromised French general in Stanley Kubrick's anti-war classic Paths of Glory (1957), TCQM also stars Dwight Frye (the fly-devouring lunatic Renfield in the Bela Lugosi Dracula) and the now mostly forgotten Norwegian-American bombshell Greta Nissen... 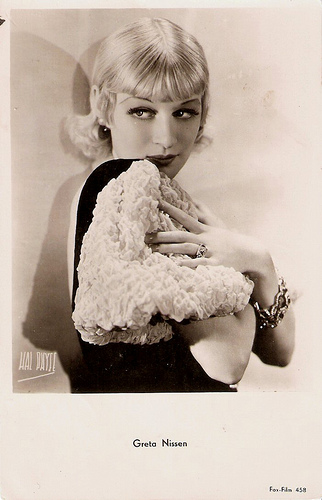 ...about whom, as you can see from the above photo, two words immediately spring to mind: Hubba and hubba.

The Menjou Fest begins this morning at 6:00am (EST) with the 1931 melodrama Men Call It Love, followed at 7:15 by Forbidden (an early Frank Capra starring Barbra Stanwyck), the 1932 Helen Hayes/Gary Cooper vehicle A Farewell to Arms at 8:45, TCQM at 11:30, and the 1942 Jackie Cooper musical Syncopation at 12:45. It concludes with the 1952 thriller The Sniper at 2:30; this last is particularly notable in that it's directed by Edward Dmytryk, one of the so-called Hollywood Ten who actually went to jail for his left-wing political views before getting out in 1951 and ultimately naming names. One can only imagine the on-set conversations the two snitches had between takes.

DVR alert: None of these, save for A Farewell to Arms, is currently on home video....