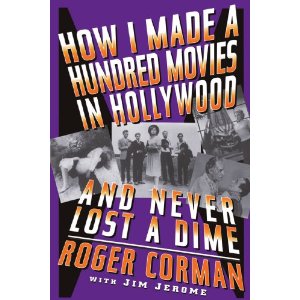 And speaking as we were yesterday of legendary director/produer Roger Corman and his upcoming better-than-Avatar made for the Syfy channel masterpiece Sharktopus: There are probably a million great Roger Corman stories, but perhaps my favorite is recounted in his vastly amusing (and obviously aptly titled) 1990 autobiography How I Made a Hundred Movies in Hollywood and Never Lost a Dime (Random House).

In 1959 Corman had a meeting with American International studio heads Sam Arkoff and James Nicholson, for who Corman had already made a series of highly profitable low-budget black-and-white films (in all sorts of genres, from sci-fi to Westerns to musicals) aimed at the drive-in audience. This time, however, Corman announced he wanted to make a picture in color.

As Corman tells it:

"After a certain amount of discussion, they agreed. We decided to tackle Poe and settled on The Fall of the House of Usher as a premise for a film. Sam didn't seem too pleased about the choice, however. ‘There's no monster in this movie', he said. I didn't want to lose the project so I did a bit of quick thinking. ‘The house,' I said. ‘The house is the monster.' "

Nicholson and Corman then came up with the idea of having Vincent Price, already a horror icon, star in the film. But when the 15-day shooting schedule began, Price had found a line in the script problematic: "The house lives! The house breathes!" He went up to Corman and said, "This doesn't make sense. Why do I have to say this?"

Sorry I couldn't find the clip of Price actually saying it, but I think the above trailer gives you a pretty good idea of how the rest of House of Usher turned out. In any case, you can (and I highly recommend that you should) order Corman's memoir over here.

Tags: Roger Corman, How I Made a Hundred Movies in Hollywood and Never Lost a Dime, Sam Arkoff, James Nicholson, The Fall of the House of Usher, Vincent Price
Print