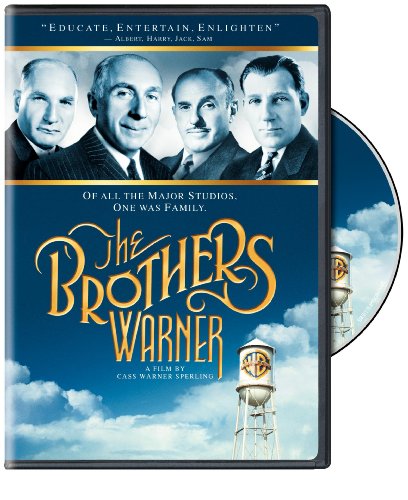 Wait a minute -- those are the Pep Boys. How did they get in there?

Seriously, just a quick note on a terrific new documentary: The Brothers Warner. The inside story of Harry, Albert, Sam and Jack Warner, the very not goyische siblings who founded and ran one of the greatest movie studios of them all. Directed by Cass Warner Sperling, Harry's granddaughter. And now available on -- wow, here's a shock -- Warner Home Video.

In any case, this premiered last week on the relatively goyische Turner Classic Movies, but for those of you who don't have basic cable, it definitely behooves beholding. Filmmaker Sperling obviously knows where the bodies are buried, metaphorically and literally, and she's very good on what made the studio special artistically -- the technical innovations (sound, for example), the fog bound visuals, the social conscience. She also doesn't stint on the inside showbiz backstage politics stuff, and along with lots of heretofore unseen home movie footage and classic film clips, she throws in lots of great juicy stories of double-dealing and betrayal as told by Warner stars including the totally goyische Tab Hunter, Debbie Reynolds and Dennis Hopper.

Here's the opening sequence to give you an idea of the wonderfully Shakespeare-by-way-of-the-Lower-East-Side ambience of the whole thing.

Incidentally, if you'll pardon a monumental digression, my all-time favorite Warner Bros. story -- the correspondence between the studio's lawyers and Groucho Marx, when the Marx Brothers were planning their 1947 film A Night in Casablanca -- is not, alas, in the doc.

Even more disappointing, I have just learned that it was kind of apocryphal in the first place.

As recounted in Arthur Sheekman's 1967 anthology The Groucho Letters, the story is that the Marxes received a letter from WB threatening legal action if they did not change their film's title (the studio deemed it too similar to their own Casablanca, released five years earlier). Groucho's response, reproduced in part below, was vintage:

Apparently there is more than one way of conquering a city and holding it as your own. For example, up to the time that we contemplated making this picture, I had no idea that the city of Casablanca belonged exclusively to Warner Brothers. However, it was only a few days after our announcement appeared that we received your long, ominous legal document warning us not to use the name Casablanca...

I just don't understand your attitude. Even if you plan on releasing your picture, I am sure that the average movie fan could learn in time to distinguish between Ingrid Bergman and Harpo. I don't know whether I could, but I certainly would like to try.

You claim that you own Casablanca and that no one else can use that name without permission. What about "Warner Brothers"? Do you own that too? You probably have the right to use the name Warner, but what about the name Brothers? Professionally, we were brothers long before you were. We were touring the sticks as the Marx Brothers when Vitaphone was still a gleam in the inventor's eye, and even before there had been other brothers -- the Smith Brothers; the Brothers Karamazov; Dan Brothers, an outfielder with Detroit; and "Brother, Can You Spare a Dime?" (This was originally "Brothers, Can You Spare a Dime?" but this was spreading a dime pretty thin, so they threw out one brother, gave all the money to the other one, and whittled it down to "Brother, Can You Spare a Dime?")...

This all seems to add up to a pretty bitter tirade, but I assure you it's not meant to. I love Warners. Some of my best friends are Warner Brothers. It is even possible that I am doing you an injustice and that you, yourselves, know nothing about this dog-in-the-Wanger attitude. It wouldn't surprise me at all to discover that the heads of your legal department are unaware of this absurd dispute, for I am acquainted with many of them and they are fine fellows with curly black hair, double-breasted suits and a love of their fellow man that out-Saroyans Saroyan.

I have a hunch that his attempt to prevent us from using the title is the brainchild of some ferret-faced shyster, serving a brief apprenticeship in your legal department. I know the type well-hot out of law school, hungry for success, and too ambitious to follow the natural laws of promotion. This bar sinister probably needled your attorneys, most of whom are fine fellows with curly black hair, double-breasted suits, etc., into attempting to enjoin us. Well, he won't get away with it! We'll fight him to the highest court! No pasty-faced legal adventurer is going to cause bad blood between the Warners and the Marxes. We are all brothers under the skin, and we'll remain friends till the last reel of A Night in Casablanca goes tumbling over the spool.

There was much further back and forth, and if you order the book here, you'll discover that it makes for pretty hilarious reading. Unfortunately, as I said, the whole thing was a bit of set-up. When the brother's family doctor wrote Groucho that he'd heard WB was trying to stop them from using the title A Night in Casablanca, Groucho wrote back:

We spread the story that Warner objected to this title for purely publicity reasons.They may eventually actually object to it, although I don't think so....At any rate, the publicity has been wonderful on it, and it was a happy idea. I wish they would sue, but as it is, we've had reams in the paper.

Sheesh. How disillusioning. Next thing you'll be telling me that Rock Hudson was actually gay.

In any case, for more on filmmaker Sperling, you could do worse than checking out her official website over here.

And of course, you can -- and very definitely should -- order The Brothers Warner DVD over here.