Watchmen of the World Unite 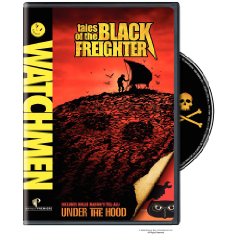 Okay, it is not exactly a secret that I was less than enthused about director Zack Snyder's take on Watchmen (if memory serves, I described it, I believe accurately, as "interminable bong-hit Nietzche") although to be fair I have to admit it's nowhere near as bad as its auteur's previous 300 (which, if memory serves, I described, also accurately, as "the most insane film ever to have grossed over 100 million bucks").

Incidentally, 300 is no longer the gayest film in history; that honor now indisputably belongs to High School Musical 3 (in a good way, of course.)

In any case, whatever your take on Watchmen, I think you have to agree that the sort of ancillary marketing stuff is getting out of hand. You may recall that a few weeks ago, Warner Home Video released Watchmen: The Complete Motion Comic, which was the entire graphic novel photographed frame by frame, with music, sound effects and dialogue added, the whole thing lasting six(!) hours (did I say interminable?). But wait -- there's more! Coming next week, the same good folks at WHV will be releasing Tales of the Black Freighter to a waiting world -- a combo of animation and live action that fleshes out two subplots from the graphic novel that were conpicuously absent from the feature film (and whose absence apparently engendered much gnashing of teeth among the cogniscenti).

Here's the trailer to give you and idea of what all the fuss is about.

So what's it like? Well, the cartoon half of the double feature is your basic made-for-TV anime, tricked out with a lot of R-rated grossout stuff and a laughably over-the-top narration by 300 star Gerard Butler, consuming vast quantities of CGI-generated scenery. The live action half is a little more interesting; essentially, it's a fake episode of a TV show a la 60 Minutes, and the conceit is that the Morley Safer-ish host is rerunning a 1975 interview with Hollis Mason, the costumed Nite Owl from Watchmen, who reminisces about how he came to take up superhero-ing. The period stuff is actually kind of cute, and Stephen McHattie, reprising his role from the film, is charming as the self-effacing vigilante.

That said, I can't imagine watching either episode more than once, and if you're so Watchmen obsessed that you feel the need to actually own this, I can only conclude that that the Cheeto fumes in your mom's basement need to be aired out and pronto.

Obviously, I kid hardcore fans of the graphic novel genre. Some of my best friends, etc. In any case, if you're so inclined you can pre-order the DVD here and god bless you.