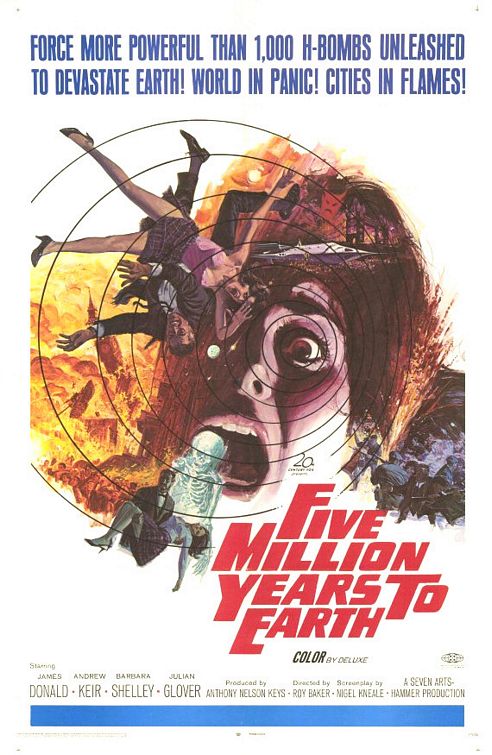 So speaking as we were the other day of a classic Hammer sci-fi film making its long overdue home video debut -- specifically, director Joseph Losey's eschatological 1963 masterpiece These Are the Damned -- faithful reader daveTM© reminded me in comments that another Hammer sci-fi masterpiece is currently missing in action home video-wise. I refer of course to perhaps the British studio's last great production, from 1967 -- the incomparable Five Million Years to Earth.

That's its American title, of course; in the rest of the world it was released as Quatermass and the Pit, and like two previous films about ultra-driven scientist Bernard Quatermass (played by Andrew Keir in this one) it was based on a wildly successful BBC-TV serial. If you've never seen it, it's hard to do justice to how powerful and imaginative it is; let's just say that writer Nigel Kneale was an absolute master at conjuring power of suggestion cyclopean horror, and that FMYTE -- which starts with the bones of prehistoric apemen being discovered in the excavation for a London subway and then proceeds to ramp up the tension almost unbearably as more and more incredible mysteries are revealed -- is about as good as the genre gets.

Here's the opening sequence-- not a widescreen transfer, alas -- to give you a little idea.

I should add that the perky girl journalist who shows up in the above clip about three minutes in...

...is adorable British actress Sheila Steafel -- and isn't she just the cutest thing in that mid-60s Mod Dolly Bird kind of way? -- who I've had a huge crush on since I first saw the film at a movie marathon in college and who, I'm happy to say, is still active in British TV in her 70s.

In any case, as I said, FMYTE is not available on DVD at the moment, but if you're willing to blow eighty bucks, you can you can order the long out of print version here. Last time I looked, there was also supposed to be a remake in the works -- Australian director Alex Proyas, infamous as the helmer of the wildly incoherent Nicolas Cage hit Knowing. was attached, as they say -- but there's been no movement on that front that I can discern currently.

I can, however, tell you that you can now watch the entirety of the original TV version over at the quite amazing Internet Video Archive. Here's episode one, first broadcast in 1958, with Hammer star Andre Morell as Quatermass. It makes a terrific contrast with the movie clip above although, alas, the perky girl journalist does not make an appearance.

Riveting stuff, I think; you can catch the rest of it -- and much more -- at the Classic TV section of the aforementioned IVA over here.