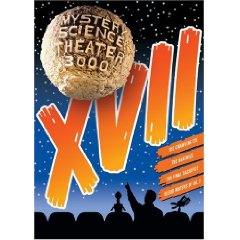 Video Event of the Week: Are we perhaps talking about the Starz/Anchor Bay DVD and Blu-ray editions of Capitalism: A Love Story, the newest comic agit-prop from portly left-wing auteur Michael Moore? Might Paramount's various disc versions of Up in the Air, Jason Reitman's surprisingly snubbed at the Oscars romantic fable with sizzling performances by George Clooney and Vera Farmiga (woo hoo!) conceivably get the nod? Or could MPI's DVD of Cedric Klapisch's Paris, a sort of Gallic answer to Woody Allen's Manhattan (starring the fabulous Melanie Laurent, of Inglourious Basterds fame), conceivably be The One?

All worthy, to be sure, but for my money (and since Paramount is stinting on review copies of the Clooney flick) it has to be Shout Factory's four disc box set Mystery Science Theater 3000 Volume XVII.

How do I love this set? Let me count the ways. For starters, the four movies being MSTied here include The Crawling Eye (one of my favorite 50s B horrors, featuring Forrest Tucker pitting his handsomeness against the titular ocular monster); the incomparable The Final Sacrifice (essentially a low budget 70s Canadian Indiana Jones and the Mullet of Doom); the 1960 Youth Run Wild classic The Beatniks (directed by voice-of-Boris Badenov Paul Frees), and The Blood Waters of Dr. Z, a mad-scientist-turning-himself-into-a-fish-monster epic that makes The Incredible Mr. Limpet look like Last Year at Marienbad.

Here's a clip from the aforementioned Marauding Peepers flick to give you an idea of the set's laugh-till-your-sides-hurt quotient.

Incidentally, The Crawling Eye was the very first official episode of MST3K, and there's a wonderfully innocent, baby pictures sort of quality to it. Fortunately, as with the rest of the shows in the set, it's been gorgeously transferred; in fact, I don't think any of the four looked anywhere near this good on my cable system back in the day, but of course I had Time Warner, so that's not exactly a surprise. (But I kid mammoth entertainment monopolies!)

In any case, Shout Factory has included a bunch of terrific bonuses, as is their wont; the most interesting is probably the new interview with Final Sacrifice star Bruce J. Mitchell, who seems ever so slightly ambivalent about his participation in the film (not to mention its cult fandom aftermath). Although I'm also taken with the Crow Vs. Crow encounter at a 2009 sci-fi convention (fans will know what I'm talking about).

Bottom line: This is some of the most hilarious stuff ever committed to 3/4 inch video tape. Which is to say you can -- and if you don't, I probably don't want to know you -- order Mystery Science Theater 3000: Volume XVII over at Amazon here. And frankly I can't wait for volume XVIII.

Okay, that taken care of, and given that things will doubtless be a little quiet around here for a couple of days, here's a fun and obviously relevant little project for us all:

As the one and only Dr. Eric Vornoff. "Home? I have no home. Hunted, despised, Living like an animal! The jungle is my home. But I will show the world that I can be its master! I will perfect my own race of people. A race of atomic supermen which will conquer the world! Ha ha ha ha ha ha!" 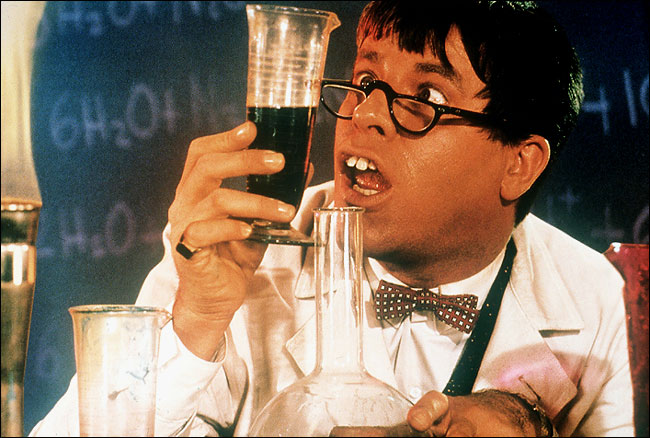 As the buck-toothed Prof. Julius Kelp, who downs a potion that turns him into an obnoxious hipster based on you know who.

As le Docteur Génessier (sorry, no first name), a brilliant surgeon who lures beautiful young women to his lab in hopes of restoring the disfigured face of his daughter. As critic David Edelstein put it (accurately), the film is " your standard obsessed-mad-doctor saga, one step above a Poverty Row Bela Lugosi feature...but it's Lugosi by way of Cocteau and Ionesco."

2. Ernest Thesiger in The Bride of Frankenstein (James Whale, 1935)

As Dr, Pretorius, who not only gets one of the greatest entrances in movie history (see above) but also some of the most memorable dialogue. "Here, have a cigar... they're my only weakness!"

And the numero uno bonkers medic in filmdom unquestionably is...

1. John Carradine in Everything You Always Wanted to Know About Sex (But Were Afraid to Ask) (Woody Allen, 1972)

As Dr. Bernardo, who responds to being tossed out of the Masters and Johnson clinic by hatching a truly fiendish plan. "Here I'm going to take the brain of a lesbian and put it in the body of a man who works for the phone company."

Tags: Capitalism: A Love Story, Up in the Air, Jason Reitman, George Clooney, Cedric Klapisch, Paris, Mystery Science Theater 3000 Volume XVII, The Crawling Eye, Final Sacrifice, Bruce J. Mitchell, Bride of the Monster, The Nutty Professor, Eyes Without a Face, The Bride of Frankenstein, Everything You Always Wanted to Know About Sex (But Were Afraid to Ask)
Print