Weekend Cinema Listomania (Special How Sweet to Be an Idiot Edition) 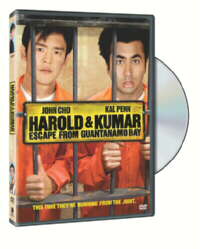 DVD Event of the Week: Is it Paramount's release of Martin Scorsese's Rolling Stones concert film/documentary Shine a Light (the group on a good, but not great, night)? Is it Sony's disc of The Band's Visit, the international hit about Egyptian musicians who arrive in Israel to play at the opening of an Arab Cultural Center? Or is it BBC Video's box set of Spaced: The Complete Series, the comedy show that launched the career of Shaun of the Dead and Hot Fuzz star Simon Pegg? All worthy, to be sure, but for my money, believe it or not, it's Warner's two-disc unrated version of....gulp...Harold and Kumar Escape From Guantanamo Bay.

Okay, okay, I realize we're not talking about The Sorrow and the Pity here; this is an intentionally idiotic and vulgar little gross out stoner comedy with few pretensions to anything, let alone art. That said, it's nonetheless often laugh out loud funny -- the Neil Patrick Harris subplot is truly a thing of profane beauty -- and the fact that it refuses to take the entire Homeland Security, Let's-Wet-Our-Pants-In-Panic-Over-the-Terrorists-Under-Our-Beds ethos a certain administration has been peddling for the last several years even remotely seriously is, well...let's just say it's refreshing and let it go at that. (BTW: James Adomian's performance as George W. Bush is the most dead-on and wicked impression you're ever likely to see). Warner's deluxe version features a state of the art transfer (I was going to say the better to enjoy the majestic cinematography of Daryn Okada and the Herrmann-esque score by composer James L. Venable, but let's not be ridiculous) and the usual life's too short bunch of extras, in this case including 27 alternate scenes (the idea being you're supposed to get high and re-edit the movie yourself. Like I said -- life's too short.)

In any case, highly recommended, and not even against my better judgement.

[Editor's Note: It needn't be a comedy per se, as long as there's a pair of ninnies in it somewhere.]

5. Way Out West (James W. Horne, 1937)
City slickers Laurel and Hardy head for the frontier to deliver the deed to a gold mine to a friend's long lost daughter. Complications and hilarity ensue. One of the greatest -- and sweetest -- comedies of all time.

4. Wayne's World (Penelope Spheeris, 1992)
Mike Myers and Dana Carvey as the theoretically dim-bulb hosts of a cable access TV show in Aurora, Illinois. The joke, of course, is that even though they're quintessential suburban 80s metalheads, they're also much much smarter than anybody realizes.

3. The Lady Vanishes (Alfred Hitchcock, 1938)
Basil Radford and Naunton Wayne all but steal one of the master's niftiest thrillers as two Brit tourists so cricket-obsessed that they barely notice they're about to killed by Nazi stormtroopers.

2. The Hidden Fortress (Akira Kurosawa, 1958)
Luckless peasants Tahei and Matashichi escape the aftermath of a battle in Feudal Japan and wind up transporting a treasure of gold through enemy territory. Comparisons with R2D2 and C3PO wouldn't be far-fetched, given that George Lucas ripped this off big-time for Star Wars.

And the all-time great dumbass duo film, it's not even close so don't give me a hard time or swear to god I'll smack you, is obviously --

1. A Boy and His Dog (L.Q. Jones, 1974)
A very young Don Johnson and a telepathic Benji-lookalike that only he can hear (voice of Tim McIntire) prowl the post-nuke-apocalypse American landscape in search of...well, let's not give that away. In any case, the joke here is that the dog is the smart one.