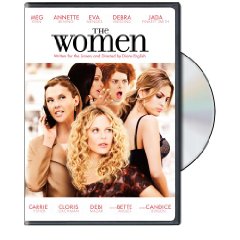 DVD Event of the Week: Is it Sony's version of The Housebunny, with Anna Faris passing convincingly for her generation's Marilyn Monroe? Are we talking Universal's The Mummy: Tomb of the Dragon Emperor, starring the desperately in need of a new agent Brendan Frasier? Or for the love of heaven, might it even be HBO's Generation Kill, the complete seven part mini-series about Marines in Iraq?

All worthy, to be sure, but for my money it's got to be Warner Brothers' remake of George Cukor 's 1939 The Women, starring Meg Ryan, Annette Benning, and whole bunch of other kooky broads (I kid, I kid!).

And no, I haven't taken leave of my good senses; this is by any stretch of the imagination a pretty lousy film, but it's got a certain built-in fascination because, post Sex and the City, remaking a 30s classic with an all-female cast and some great snarky dialogue probably seemed like a good idea, at least on paper. And Murphy Brown auteur Diane English probably seemed like the right woman for the job as well.

Actually, if casting were everything, this would be a modern classic, and to be fair, the fact that's its watchable at all is down to the actresses. Ryan is perfectly fine in the Norma Shearer role; ditto Benning as Roz Russell, and Candy Bergen as the mom character played by Lucille Watson. And Eva Mendes, for me anyway, is a vast improvement over Joan Crawford in the original; she overacts a tad, but she also oozes sex and I for one applaud her efforts in that regard.

Nonetheless, overall the thing resolutely refuses to work; the attempts at modernization -- one of the characters is now an out Lesbian -- seem trowelled on, the film's visual style is static and ugly, and English never makes up her mind whether she's staging a screwball bitchfest or some kind of paean to female friendship and empowerment. Basically, it's a mess, but like I said, at least the actresses are fun. In any case, Warner's disc version boasts a razor-sharp transfer, and you have your choice of either a widescreen or full-frame version; bonuses include a couple of negligble deleted scenes and two moderately interesting making-of docs.

Worst Ever Remake of an Earlier Film, Classic or Otherwise!!!

5. The Time Machine (Simon Wells, 2002)
Despite being directed by the grandson of the tale's author, this pointless re-imaging of the classic sci-fi was perhaps the most unwatchable movie of its year.

4. Cat People (Paul Schrader, 1982)
A modest, power of suggestion B-thriller transformed into incomprehensible Bressonian mishegass with a lot of portentous sexual huffing and puffing. Nastassia Kinsky did look good on the rug, though, I'll give you that.

3. Satan Met a Lady (William Dieterle,1936)
Second version of "The Maltese Falcon," inexplicably re-written as a smarmy romantic comedy, with a horrendously miscast Bette Davis and an awful Warren William making like a drunken John Barrymore in the Sam Spade role. John Huston sensibly pretended it never existed (much as audiences had done) when he remade it in 1941.

2. The Three Musketeers (Stephen Herek,1993)
Forget the rewriting of the villainous Lady DeWinter as a sympathetic character, a crime against nature (or Dumas) that threw the whole thing out of dramatic wack. But the simple fact that Chris O'Donnell was cast as D'Artagnan was prima facie evidence that everybody at Disney was on mind-altering drugs in the early 90s.

And the all-time worst Hollywood recycling job, it's not even close so don't give me a hard time or swear to god I'll smack you, is obviously --

1. Rocky II (Sylvester Stallone, 1979)
It was supposed to be a sequel, but instead turned out to be an almost frame-for-frame recreation of the original. I remember seeing this in the theater and seriously considering making a citizen's arrest of the ticket lady.