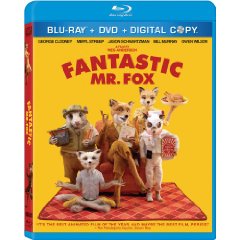 Video Event of the Week: Are we perhaps talking about Paramount's new DVD and Blu-ray commemorative editions of the newly restored The African Queen (back on home video after years in limbo)? Might Lionsgate's box set editions of the riveting 60s period piece Mad Men: Season 3 possibly get the nod? Or, despite her current tribulations (hey -- you marry somebody named Jesse James, you probably should see problems coming your way), might Sandra Bullock's Oscar-winning turn in The Blind Side (on DVD and Blu-ray from Warner Home Video) conceivably be The One?

All worthy to be sure, and I'll have something to say about Sandra next week, but since Paramount didn't send me TAQ, for my money it's got to be Fox's Blu-ray/DVD/Digital Copy set of Wes Anderson's (mostly) stop-motion animated marvel Fantastic Mr. Fox, featuring the voices of George Clooney and Meryl Streep and adapted from the kids story by Roald Dahl.

Some movies you can just tell are going to work practically from their opening moments, and for me this this was one of them -- from the first shot of Clooney's titular fox (who, as we later find out, is essentially a typical sitcom suburban dad on the cusp of a mid-life crisis) standing on a hill listening to "The Ballad of Davy Crockett" on his Walkman, I was utterly hooked, and the film just got funnier and more charming from there. A lot of it is simply the look of the thing; the art direction and design of FMF -- which is sort of one-dimensional (except when it isn't) in a style that combines the flat, painterly look of the illustrations in children's books and the landscapes of early 90s CD-rom games -- is pretty funny all by itself. But on top of that, Anderson stages the very droll script's various comic set-pieces with a sort of deadpan silent movie timing that's quite remarkable (albeit recognizable from his live action movies, particularly the recent The Darjeeling Limited, which of course featured Jason Schwarzman and Owen Wilson, who here voice Mr. Fox's maladjusted son and his overbearing high school Whack-Bat coach respectively).

Here's the trailer to give you an idea of how interestingly original and quirky the whole thing is.

Without giving anything further away, I should also add the rest of the voice work is aces; Michael Gambon, in particular, is a total hoot as the villain of the piece, and the film is practically stolen by Willem Dafoe, who plays his ciderhouse rat security guard character as a sort of Zen Apache dancer.

As mentioned, the set includes both the Blu-ray and DVD versions of the film; both look fantastic (sorry), but unless my geriatric eyes are totally failing me, the Blu-ray is just incrementally better. It does, however, contain the usual plethora of bonus features (a few of which are absent from the DVD), which is to say a bunch of fitfully interesting making-of docs and one brief appreciation of Roald Dahl, which is good as far as it goes but makes one wish that there was a full-on film about Dahl and his work (his astounding and all but forgotten Twilight Zone--ish 60s TV series Way Out, for example).

In any case, you can -- and very definitely should -- order Fantastic Mr. Fox here, and I would say pronto.

Okay, with that taken care of, and given that things will doubtless be a little quiet around here for a couple of days, here's a fun, but necessarily left field (as for the life of me I couldn't come up with a Mr. Fox-specific theme to my liking) project for us all:

Most Amusing or Alarming Film Title Ever!!!

Also known as Absence of Maalox. Just kidding -- its real alternate handle was Gas! or It Became Necessary to Destroy the World in Order to Save It. Seriously, though, you could probably thumb through Corman's filmography and come up with any number of titles as unpromising. The Saga of the Viking Women and Their Voyage to the Waters of the Great Sea Serpent, anyone?

What can I tell you -- this one's just cracked me up for years.

High-concept doesn't come any pithier. If that's the word.

Via the novel by the great Mickey Spillaine -- pretty much the most perfect example of tough guy film noir poetry, although the genre coughed about a zillion other titles almost as good.

And the Numero Uno moniker for a film or flick, for good or ill, undoubtedly has to be ---

Because it's directed by a guy named Lasse, for heaven's sake. My Life as a Dog. Lasse. Get it?