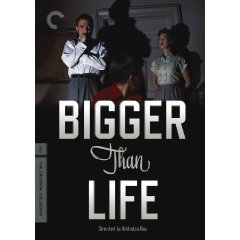 Video Event of the Week: Are we perhaps talking about Summit's Blu-ray version of the teen vampire sequel New Moon, with the toothsome (in the traditional sense of the term) Kristen Stewart? Might Disney's DVD/Blu-ray/Digital Copy set of the traditionally animated The Princess and The Frog by any chance make the cut? Or could Kino's Blu-ray upgrade of Fallen Angels, Won Kar-wai's dark 1995 hit man classic, conceivably be The One?

All worthy to be sure, and I'm going to have something more to say about both the vampires and the frog next week, but for my money it's got to be the Criterion Collection's DVD version of the great Nicholas Ray's 1956 Bigger Than Life, starring James Mason and the beautiful and underrated Barbara Rush.

What it's about (via Criterion's summary):

When a friendly, successful suburban school teacher and father (Mason) is prescribed cortisone for a painful, possibly fatal rare disease, he grows dangerously addcted to the experimental drug, resulting in his transformation into a psychotic and ultimately violent household despot. This Eisenhower-era throat grabber, shot in expressive CinemaScope is an excoriating take on the nuclear family.

That's accurate, as far as it goes, I guess, although if I'd been writing the blurb I might have shorthanded the film as Dr Jekyll and Mr. Hyde Meet Ward and June Cleaver. I actually saw this on late night TV back in the late 60s or early 70s, and I remember it, mostly, as being surpassingly odd. The fact that Ray's widescreen compositions didn't work on the tube cropped had something to do with it, I'm sure, as did the fact that there were drugs of my own at work, if you catch my drift. In any case, I hadn't seen it since, and in the subsequent years, the film's critical rep -- in its day it was somewhere between ignored and reviled -- has improved to the point where it's now generally considered, at least in serious film circles, to be one of the great, even crucial documents of the 50s.

However, at the risk of being drummed out of the corps, serious critic-wise, I gotta say -- having just watched Criterion's rather gorgeously transferred version of the thing that...I'm not at all convinced. In fact, my reaction to Bigger Than Life this time was not that it was surpassingly odd so much as merely cockamamie.

There were times, in fact, while watching the DVD that I felt like somebody had slipped me an Ed Wood movie with a budget. Ray doesn't mount the story (which is based on a New Yorker article about a real case) as melodrama, per se, but what he does stage is stylized in such a peculiar way that the over-the-top acting by Mason and Rush kind of sneaks up on you; the sheer unreality of it all doesn't immediately register, especially after the opening passages, which are fairly conventional renderings of Father Knows Best suburbia. Of course, by the final monster-on-a-rampage freak out scene, where Mason essentially does Jack Nicholson's 'Here's Johnny!" bit twenty years ahead of its time, you'll definitely have noticed that this is weird, wacky stuff.

In fact, almost everything else about the film feels off, including some shoddy edits that seem to come out of nowhere and several garish Color by DeLuxe lighting effects that would have been considered ludicrous in a straight horror movie. Ray being Ray, of course, there are a couple of inspired moments -- I'm thinking in particular of the sequence when Mason first collapses in his doorway, with his hand on the buzzer; as writer B. Kite notes in an interesting if overwrought appreciation of Ray included with the set, it's as if the house is doing the screaming for Mason's character. There's also an effective bit where the wife character (Rush) and the audience realize simultaneously that the cortisone is not just changing Mason psychologically but physically, but that one, in particular, is poised on the knife-edge between frisson and chuckle and no, I don't think that's some kind of deliberate artistic strategy.

The bottom line, for me anyway, is that Bigger Than Life is mostly a muddled, pretentious and occasionally laughable mess. And please don't get me started on the ridiculous cop-out finale, in which Ray or screenwriters Cyril Hume and Richard Maibaum or somebody throws in a gratuitous homage to the end of Ibsen's Ghosts; it's the equivalent of a huge wink (I'm not sure at what) and it's really obnoxious.

Here's the opening sequence which, alas, doesn't get to my caveats, particularly, but which should give you at least some idea of what the thing looks like.

As I mentioned earlier, Criterion's presentation of the film couldn't be better; the restored digital transfer is as gorgeous as you'd expect, and there are lots of interesting bonuses, including a running commentary by Ray scholar Geoff Andrews, a TV interview with Ray from the mid-70s, a new interview with his widow, and a video appreciation of the film by author Jonathan Lethem; that last verges on being a parody of film snob bushwah, but it's apparently meant straight.

In any case, don't take my word for this. It's a Nicholas Ray movie, for heaven's sake, and thus behooves beholding under any circumstances. Which means that you can -- and absolutely should -- pre-order it here. And if after you've watched it you decide that I'm all wet on the subject, I'll certainly understand.

Okay, with that taken care of, and given that things will doubtless be a little quiet around here for a couple of days, here's a fun and obviously relevant little project for us all:

A Victorian detective chases Jack the Ripper through London's Whitechapel while pausing occasionally to, as they say, chase the dragon as well. The Hughes' first foray outside the hood is a moody and stylish horror exercise, with a characteristically brilliant Johnny Depp as the troubled and ultimately doomed policeman.

Thomas de Quincy's early 19th century classic recast as an exploitation vehicle for a black-clad Vincent Price. As the descrption from IMDB suggests -- "At the slave auction where beautiful Oriental girls are displayed in hanging bamboo cages, de Quincy befriends a tiny wisecracking female Oriental dwarf" -- this may, in fact, be the greatest movie ever made.

A bunch of now grown up college chums discover that a batch of LSD they did in the hippie days is suddenly making their hair fall out and turning them into homicdal maniacs. Wickedly satirical on a number of levels, obviously, and hands down the best premise for an exploitation horror flick ever.

Undercover narcs Jason Patric and Jennifer Jason Leigh get in good with big time heroin dealer Greg Allman (heh!) and wind up hooked in the process. Harrowing and scary, and why Patric isn't a bigger star remains one of the mysteries of the age.

And the numero uno psychotropic cinematic artifact clearly has to be -- wait, I'm getting woozy here, oh wow it's...

A mild-mannered university prof experiments with LSD and transforms (unbeknownst to him) into a murderous Mr. Hyde-like telepathic superbeing. Quite ahead of its time, especially for TV (it's one of the most memorable episodes of The Outer Limits), and directed with characteristic spooky flair by the still undervalued Oswald.