Things That Make You Think You're On Acid (Part II) 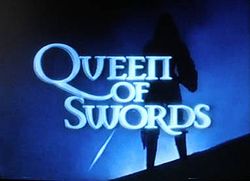 And speaking as we were of the myriad patently ridiculous TV action shows that sprang up in the wake of the Hercules/Xena, Warrior Princess franchise, it would be, as we noted yesterday, almost impossible to top the wondrous Cleopatra 2525, given its one-two punch of a themesong based on a Zager and Evans hit and its failed breast augmentation surgery backstory. There were, however, a couple of other series which at least played in the same wonderfully preposterous ball park.

One that immediately springs to mind (a frightening metaphor, I'll grant you) is the incomparable Queen of Swords, which ran in syndication (2001-2) for 22 episodes before being cancelled in a flurry of lawsuits. A low budget Zorro knockoff, its theme song was sung by Jose Feliciano, which is a step up from Zager and Evans, I suppose, and starred the quite lovely Tessie Santiago as the titular swashbuckling heroine.

On its own cheesy terms, it was at least a watchable time waster, and a guest appearance by a protracted in the molar Bo Derek as a vengeful virago was actually a memorable camp hoot. Nonetheless, it was all but impossible to get beyond the show's central conceit -- that when the demure beauty in the top row center... 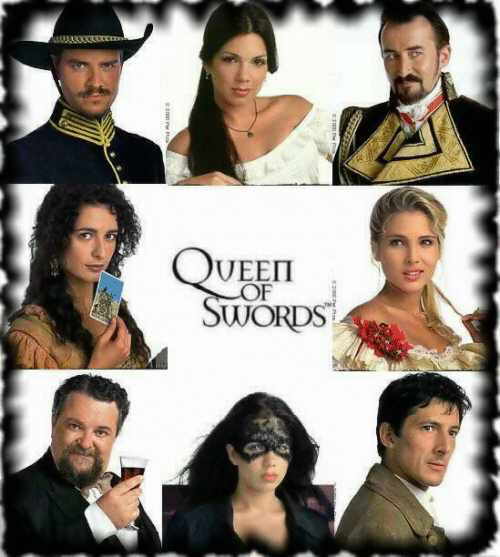 ...donned the mask seen in the bottom row, she became completely unrecognizable to everybody in her Spanish California hometown. Seriously, Santiago would have dinner with the series villains sans mask, then put the thing on and kick their butts in a sword fight, and yet nobody ever twigged that it was her. I mean, I understand the concept of Suspension of Disbelief, but this was too much.

In any case, we're informed that despite or because of this torrential illogic the show has acquired a devoted cult following over the years; you can order the complete 22 episode run on DVD here, although we can't vouch for the quality.

COMING MONDAY: Things That Make You Think You're on Acid (The Final Chapter), in which we ponder the relative merits of an Arabian Nights fantasy with the costumes seemingly made from my mother's old shower curtains and a Conan Doyle adaptation in which a character falls into a bottomless ravine and emerges with a brand new haircut. I am not making this up.