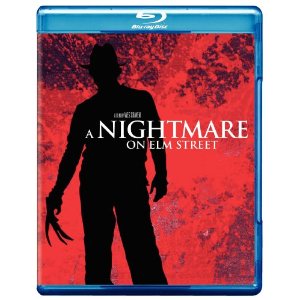 Video Event of the Week: Might we be talking about Kino's new Blu-ray of their magnificently restored version of Sergei Eisenstein's Battleship Potemkin? By any chance could Paramount's DVD of The Lovely Bones, the moody supernatural thriller directed by Hobbit-meister Peter Jackson, get the nod? Or against every single decent human impulse since the dawn of recorded history, might Fox's 2D DVD and Blu-ray versions of James Cameron's Avatar, a/k/a The Worst Movie Ever Made©, conceivably be The One?

All worthy to be sure, except for Avatar, about which I'll have more to say when my review copies of the discs arrive, but until then for my money it's got to be New Line's Blu-ray upgrade of Wes Craven's 1984 horror classic A Nightmare on Elm Street, starring Robert Englund and a frighteningly young Johnny Depp. Yes, I know this actually arrived in stores earlier this month, but I figured with the remake coming out next week it was definitely appropriate to hold off a bit.

In any case, I'd never seen this all the way through before; in fact, I'd only seen bits of it on cable over the years, and it always struck me as pretty cheesy. This new high-def version has upped my opinion of its frissons, however, at least up to a point, which is to say the film is not particularly well-made, if truth be told. The acting, charitably, is at best uneven (Ronnee Blakely, as the de rigeur 80s dysfunctional mom, is truly awful), and despite some occasionally impressive mechanical special effects, the film betrays its low budget rather often (the sensational Blu-ray transfer is actually rather unforgiving in that regard; you can see how slapdash the lighting is in various crucial scenes).

That said, writer/director Craven tapped into something here, something primal that gets to you despite the shlock genre tropes. The fact that your dreams can kill you is actually kind of profound in an Oh Wow! sort of way, and Craven manages, albeit fitfully, to locate the poetry and Gothic terror lurking, hitherto unsuspected, in high school hallways and suburban streets, turning what would otherwise be just another Horny Teens Getting Offed gore fest into a surrealist exercise a la Cocteau. Okay, it's not as good as that sounds, obviously, but the film has an undeniable power, and monstrous villain Freddie Kruger -- he of the scarred face and knives for fingers -- has become, justifiably, iconic.

Here's the opening sequence -- not Blu-ray quality, obviously, but it will give you at least a taste.

New Line's Blu-ray comes with the usual assortment of extras, including audio commentaries by Craven and cinematographer Jacques Haitkin, plus a couple of making-of docs and alternate endings (the one where Freddy drives the car away is actually kind of cool), but as is so often the case with these packages, the film itself -- and as I said, the high-def transfer is appropriately awesome -- remains the thing. I should also add at this juncture that I would like to say that Depp's performance makes you realize that you are already, at this point in his career, in the presence of perhaps the most interesting actor of his generation, but I would be fibbing if I did.

In any case, you can -- and on balance, should, given the film's genuine status as a cultural touchstone -- order A Nightmare on Elm Street over here.

Okay, and with that out of the way, and because things are most likely going to be quiet around here for a few days, here's a fun and obviously relevant little project for us all:


Malevolent telepaths who can, literally, make your head explode. Actually, most of Cronenberg's horror flicks have amazingly original premises (Videodrome, anybody?) but this one is, justifiably, the most notorious.

Sort of cute furballs from outer space eat their way through a picture postcard small town. Any resemblance to the vastly superior Gremlins, from 1984, is totally not coincidental.

A giant rotating atomic turtle. Yeah, that could happen. Shout Factory's got an excellent restored widescreen DVD version of this coming out in May, incidentally, so save your shekels.

Okay, the plot is, uh, lifted from It! The Terror From Beyond Space, and the art direction from Planet of the Vampires. Still, the titular creature -- beginning as a face-hugging whatsit with acid blood before evolving, several times, into something unspeakably worse -- was THE most surprising movie monster of the 70s.

And the Numero Uno mind-boggling horror film concept of them all, please -- it's not even a contest, quite self-evidently is...

The utterly amazing Bat/Rat/Spider/Crab. 'Nuff said. And yes, I know it's not strictly speaking a horror movie. Sue me.