How Bad Could It Be?: Love Stinks 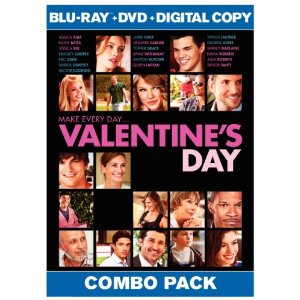 Just got done watching the New Line Blu-ray version of Valentine's Day, the 2010 romantic comedy directed by once-and-future Laverne and Shirley auteur Garry Marshall and starring a more all-star than usual all-star cast including Julia Roberts and Jamie Foxx. I missed this one in the theaters, partly because I belong to that (apparently) small sub-species of humanity that was less than thrilled with Marshall (and Roberts, if truth be told) for the morally reprehensible Pretty Woman, and partly because a little Taylor Swift (heh!) frankly goes a long way with me. That said, it's been twenty years since Marshall's glorification of street hooking first annoyed me and I don't hold a grudge forever. Also, the divine Anne Hathaway is on board in this one, so I figured what the hell -- it might be worth a look.

Okay, I made up that last bit about Elaine's. In any event, here's the trailer to give you just a taste of the film's thousand sensitive beauties.

Anyway, the answer to our earlier question is "really bloody awful, verging on unwatchable." To be sure, Marshall directs his humongous ensemble cast with all the deft comic subtlety of a Visigoth, but the film's problems are mostly down to Katherine Fugate's script, which begins with a deeply dubious premise -- every single person on the planet is obsessed with the titular holiday -- and then proceeds to flesh it out with a succession of characters that range from the completely unlikable to the barely credible as actual human beings. Unsurprisingly, this seems to have a dispiriting effect on the actors, most of whom (in a reasonable response to the barely half-dimensionality of their roles) seem to be sleep-walking their way through the film. The aforementioned Taylor Swift -- playing perhaps the most vapid and obnoxious teen in movie history -- probably does deserve points for guts (this is her feature film debut, after all), but by the time the Patrick Dempsey character, who we've seen leading a double life -- juggling a mistress and a wife and kids -- grabs a bunch of tennis balls and literally starts juggling them(!) I had pretty much decided to get on a plane to LA, find Fugate and smack her upside the head with a dead fish.

New Line's Blu-ray of all this is almost frighteningly vivid looking, although having A/B'd it with the DVD version included in the set, I'd be lying if I said it differed from its lower tech cousin in more than incremental ways. Blu-ray bonuses (which I can't imagine accessing more than once) include a commentary track by director Marshall, who I'll grant you is amusingly avuncular, a Jewel music video (oh joy!), the de rigeur bloopers and outtakes, and a teaser trailer for the forthcoming Sex and the City 2: The Road to Hell, or whatever it's called.

All in all, one of the least pleasant experiences I've had in my living room in months. You can -- and if you must, I won't think ill of you, although I may edge slowly away -- order it over here.