Okay, forget Ocean's 11 (the original). Forget even the sublime Robin and the Seven Hoods. For me, the primo Rat Pack flick, the one that truly catches the whole martini-soaked ring-a-ding-ding ambience of the world's most exclusive men's club is -- a western? Yup, it's the completely bonkers 1962 Sergeant's 3; I bring this up because it's on Turner Classic Movies tonight (10 pm EST) and lord knows, if ever a movie justified the invention of TiVo, this one's it. (If you don't have cable, order the DVD here -- trust me, you won't regret it).

Did I say bonkers? Well, here's the plot summary (courtesy of the DVD box):

Sounds vaguely familiar? You got it, folks -- it's a remake of everybody's favorite Imperialist classic Gunga Din.

Which means, of course, that this man -- 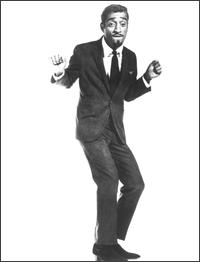 -- is actually playing this character. 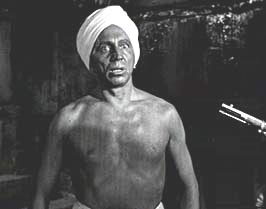 As Christina Applegate famously said on Married With Children -- the mind wobbles. In any case, it's clearly Must See TV....