I must confess, I wasn't completely surprised to learn that the second Narnia movie took in ten million bucks less than its predecessor in its opening weekend. Of course, I was just a tad less enthusiastic about it than some of my colleagues; frankly, I don't know if the world really needs another movie about a fabulous mythological kingdom populated by talking animals. But that aside, the storming-the-castle sequence is beautifully staged and genuinely exciting, Eddie Izzard''s swashbuckling animated mouse is almost as funny as Antonio Banderas's swashbuckling animated pussycat in Shrek, and all in all the film is a diverting enough timewaster that I probably shouldn't kvetch.

That said, I'm guessing the reason the sequel is doing less well than the original comes to down one simple fact: Ben Barnes, as the titular Prince Caspian --- 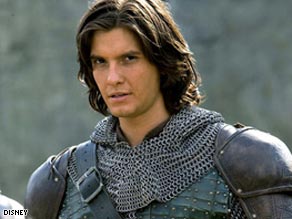 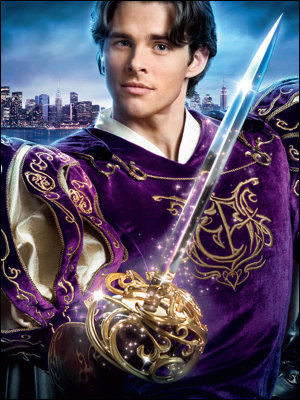 Seriously, I'm sure Barnes is a perfectly fine actor and an otherwise swell guy, but in Caspian he mostly comes across like a community theater reject working a Renaissance Fair; watching the film, there were moments when I basically expected him to face the camera, wave his sword and shout "Huzzah!" Or worse, start singing.

Okay, that's my theory and I'm sticking with it. In any case, I await the film's forthcoming grosses with more than usually heightened curiosity.