The Worst Movie Ever Made™: An Occasional J'Accuse! 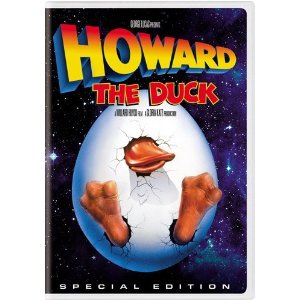 Okay, I'm aware that for the better part of this year I have been referring to James Cameron's Avatar, a film that has not only changed the course of cinema but in fact all of life as we know it, as The Worst Movie Ever Made™.

Obviously, this is a base canard, and by way of penance we now inaugurate an ongoing series devoted to determining just which celluloid creation or creations actually deserve the title.

And we begin with a Pop Quiz:

How soon can you tell if a movie is truly and irredeemably going to suck?

In the case of director Willard Huyck's 1986 butchering of the brilliant Marvel Comic series Howard the Duck...

...the answer is approximately two minutes and fifty-four seconds into the credit sequence.

Which is to say the moment you first see the guy in the stupid duck suit full on. And I'm not talking about Elton John.

Seriously, HTD is pretty much unwatchable after that, and having just re-read the first thirty odd issues of writer Steve Gerber's brilliant satirical comic (available in economical paperback form here) I am even more appalled at how everybody connected with this film, presumably with the blessing of producer George Lucas (who learned nothing in the intervening years, hence his creation of Jar-Jar Binks) went out of their way to trash everything that made Gerber's series the most brilliant thing of its kind in American pop culture in the 70s. In any case, few people today will admit to their culpability in the project; for example, then MCA/Universal president Sidney Sheinberg lobbied very hard for HTD, because the studio had passed on previous mega-hit Lucas projects, but subsequently denied any involvement, claiming that he never read the screenplay. Yeah, right, Sid.

Equally unbelievably, Howard the Duck is at present available in a deluxe special edition DVD. You can order it here, although if you do you will deserve the scorn of all who walk upright.