The video event of the week, clearly, is the Fox DVD release of Raoul Walsh's The Big Trail, the astonishing 1930 John Wayne western filmed in an early 70mm widescreen format called (with justification) "Grandeur." TBT, which flopped when originally released, more or less vanished until MOMA restored it in the 80s, and that version is out now on a two-disc set with the alternate 35mm reduction and two interesting making-of documentaries. 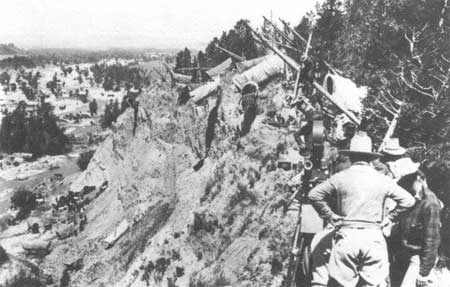 Visionary may be too strong a word for Walsh's direction here, but perhaps not; as Dave Kehr noted in the New York Times, he "makes maximum use of the width of the big screen, composing his shots so that the eye is led, as in classical painting, to pick out a series of details across the surface of the image...what Walsh is doing does not really find an equivalent until Jacques Tati's 70-millimeter masterpiece of 1967, Playtime."

I'm not as big a fan of Tati or Playtime as Kehr, but he's dead on as far as TBT is concerned, and while the DVD version can't really duplicate the experience of seeing it on a big theater screen, it'll certainly do in a pinch.

But in any case, the weekend is upon us and as usual things will be quiet around here until Monday. So while we wait, here's an obviously relevant little project to tide us all over --

Most Visually Impressive Widescreen Movie Ever!!!

Okay, here's my totally top of my head Top Five:

5. The Last Emperor (1987 -- Bernardo Bertolucci)
Had numerous chances to see this one in theaters back in the day, but never got around to it. Then I saw the original home video release and nearly slapped myself silly for having missed it. Forget the gorgeous Forbidden City locations -- Joan Chen's cheekbones clearly demand widescreen!

4. Spartacus (1960 -- Stanley Kubrick)
Kirk Douglas pits his chin dimple against the might of the Roman Empire. The scene where he and Woody Strode fight it out in the arena while decadent aristocrats barely notice them from above is one of the most amazing and subtle uses of widescreen ever.

2. Solaris (1972 -- Andrei Tarkovsky)
More longeurs than a Pinter play, and a couple of episodes of the original Star Trek did the same story with rather more wit. Tarkovsky's use of widescreen, however, never fails to impress.

And the number one, no question about it, who are we kidding it's not even a contest, is --

Okay, okay, this one is on a, shall we say, slightly lower aesthetic level, but say what you will about Corman -- he really knew how to frame for widescreen. There's a balcony scene with two characters on the very far right and left -- I caught it on TV once in a panned and scanned version and all you saw was a statue in the middle with the voices off camera. Unintentional surrealism at its best!!!

Alrighty -- what would your choices be?