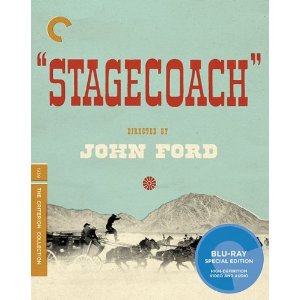 Video Event of the Week: Are we perchance talking about Sony's Blu-ray edition of Nine, the Broadway musical adaptation (by you should pardon the expression Rob Marshall) starring Daniel Day-Lewis? Could Paramount's Blu-ray upgrade of Steven Spielberg's WWII epic Saving Private Ryan conceivably get the nod? Or, and I'm not saying yes or no, are either of Lionsgate's disc versions of Tetro, the powerful yet obscure little art film Francis Ford Coppola unleashed on the world last year, by any chance The One?

All worthy to be sure, but for my money it isn't even a contest -- obviously, it's the Criterion Collection's fantastic new Blu-ray edition of John Ford's possibly greatest Western ever made, the incomparable 1939 Stagecoach. Starring John Wayne, in the role that, deservedly, made him a star.

This is kind of the John Wayne movie for people who hate John Wayne, actually. Here he is in his very first scene, making perhaps the greatest entry in screen history, or at least till William Shatner's in Star Trek II: The Wrath of Khan. Okay, I'm kidding about the Shatner part.

In any case, this isn't just a great Western (not to mention an innovative one) it's a great movie period -- pictorially stunning (Ford's first trip to Monument Valley), a model of economical storytelling, and as perfect a handling of a large ensemble cast as you'll find anywhere this side of Robert Altman. There's a reason Orson Welles studied it like a holy text before shooting Citizen Kane, i.e. there isn't a frame of it that isn't visually or dramatically interesting. It's also, on the most basic level, just a wildly entertaining ride. I first saw it back in the late 60s, and since then, whenever it's shown up on TV I always promise myself that I'll sit through only ten minutes or so. But then (as also seems to happen to me with Casablanca and Hitchcock's The Lady Vanishes) I inevitably find myself both sucked into the story and fascinated by the mechanics of the film's construction, so that before I know it I've watched it all the way through yet again.

It should be noted at this point that the film itself has an almost legendary post-release history. The short version is that, for whatever reason, no original negative of the film has been known to exist for decades, and as a result most early TV prints were pretty crappy. The story that a pristine copy was discovered in star Wayne's garage, however, turns out not to be completely apocryphal. in fact, Wayne did own a release print that had never been unspooled and he allowed a negative to be struck from it in 1970; most of the prints subsequently shown in theaters derive from that, probably including the previous legit DVD on Warner Home Video as well. The version that most of us have seen on TV since the late 90s, however, is one restored by the UCLA Film and Television archive.

Criterion's Blu-ray, on the other hand, was refurbished from a 1942 nitrate duplicate negative, and although there are places where the damage to it was unrepairable even with contemporary technology, by and large Stagecoach now looks vastly better than I have ever seen it look; with those noted exceptions, the images here have exceptional detail and (to my eyes) a new clarity. Whether Criterion's restoration looks better than the UCLA version by virtue of its intrinsic quality or because the Blu-ray medium here is simply a superior video delivery system, I really can't say, but I do know that if you get this you won't be disappointed. As you might expect, Criterion has also included a generous selection of bonus features, including a bunch of making-of docs, a tribute to pioneering stunt man Yakima Canutt, a vintage interview with Ford and a appreciation by the still dapper after all these years Peter Bogdanovich. The most fascinating of the bunch, however, are a nicely restored 1917 silent feature by Ford called Bucking Broadway (apparently his very first Western), and a 1949 radio staging of the film with stars Wayne and Claire Trevor recreating their roles.

Bottom line: A flawless package with a very great film at its heart. You can -- and if by now you don't understand why you definitely should there's no hope for you -- pre-order it over here.

Okay, with that out of the way, and because things are most likely going to be kind of quiet around here for a few days, here's a fun and obviously relevant little project for us all:

Most Memorable Screen Debut or Breakthrough Appearance by an Actor or Actress!!!

Yeah, it may have been just a comic book movie (although I think it's considerably better than that) but seeing Jackman for the first time (as most folks did here) was like getting a tantalizing glimpse of a young Gary Cooper or Clint Eastwood.

Widmark had a long and terrific career, but for me, as for lots of people, he will always be chuckling psycho hitman Tommy Udo, the guy who pushes the old lady in the wheelchair down the tenement stairs. Hey -- I'm sentimental that way.

Damn. Guy spends the entire movie with his face wrapped in bandages and yet he still becomes an instant star.

As the gorgeous young mistress of desperate old Louis Calhern. A small part, but you can't take your eyes off her. Joseph Mankiewicz, who immediately cast Monroe in another small but memorable part (in All About Eve) was just one of many who noticed.

And the Numero Uno first impression made by a future megastar absolutely positively, no fooling around here, just HAS to be...

1. Clint Eastwood in Revenge of the Creature (Jack Arnold, 1955)

Seriously -- who amongst us does not remember where we were the first time we saw Clint's magical turn as Lab Technician #1?