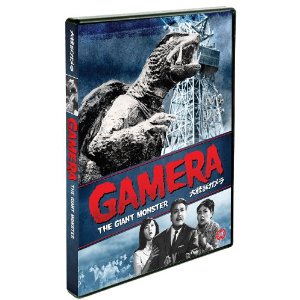 Video Event of the Week: Are we perhaps talking about the Criterion Collection's remarkable new DVD and Blu-ray versions of John Ford's western to end all westerns Stagecoach? Might Warner Home Video's 45th anniversary DVD version of David Lean's beloved-of-Andy Warhol Russian Revolution epic Dr. Zhivago concievably make the cut? Or in the face of all logic and reason, might Universal's various disc versions of Leap Year, the latest generic romantic comedy wasting the talents of Amy Adams, by any chance be The One?

All worthy, without doubt (except for that last), but I'm saving Stagecoach for next week, and ditto Zhivago, so for my money (arbitarily, to be sure) it's got to be Shout! Factory's wonderful new edition of the original uncut Japanese version of the 1965 debut of everybody's favorite flying nuclear turtle -- Gamera The Giant Monster!

The Gamera series, from Japan's Daiei studio, was apparently conceived from the outset as a sort of kids-friendlier alternative to the Godzilla films being made by rival Toho, but this first one is done relatively straight. Yes, there's an annoying little tyke in there, but there's also a lot of Cold War paranoia and and some flashy special effects (even though the titular monster is a guy in a suit). Obviously, no one's gonna mistake this for a masterpiece, but it's a much better than average period sci-fi flick, and there's something genuinely charming about its innocence -- you'll believe a turtle can fly.

Here's a clip from the Shout! Factory package. As you'll note, the special effects are actually pretty damn good.

In fact, I'd say the F/X are about as good as you would have seen anywhere in a movie in the early to mid-Sixties; the planes certainly look as believable as the bombers in Dr. Strangelove.

Shout! Factory's print is, as I mentioned, the original uncut Japanese version, and the video transfer is from the same high-def master used for the Japanese Blu-ray edition, which is to say it looks awesome. Bonuses with the set include an okay still gallery, a couple of trailers, and a reasonably informative booklet with an essay by director Noriaki Yuasa, who'd stay with the series as it devolved(?) into more obviously adolescent fare over the years.

It's a terrific package overall, and if you're fan of Japanese monster flicks of the period (and what right thinking person isn't?) it's obviously a must-have. I will confess, however, that I miss a certain love song to a turtle as seen in the Mystery Science Theater 3000 version of Gamera....

...but on the other hand, the MST print (from the 70s Sandy Frank version) is nowhere near as good looking.

In any case, you can -- and no question about it, definitely should -- pre-order Gamera over here.

Okay, and with that said, and because things will doubtless be a little quiet around here for the next couple of days, here's a fun and obviously relevant little project for us all:

Best or Worst Film Featuring an Aquatic or Reptilian Performer (Animal or Otherwise)!!!

The great Knotts portrays a mild-mannered schlub who becomes a super spy after he learns how to turn himself into a fish. Even more remarkable, the fish resembles the 70s Mick Jagger.

They tell me that this is actually a guy in a rubber suit, but frankly I think that's a canard.

I actually prefer the sequels -- Porca: Killer Pig and Lorca: Killer Poet -- but still, a stellar performance by old Orc.

And the Numero Uno performance as a cold-blooded character unquestionably has to be by...

Probably the single slimiest character in the history of cinema. Seriously, that scene at the end where he takes his huge hand and covers his incestuous granddaughter's eyes is the creepiest thing you'll ever see.